At one time Glenrio, Texas was a thriving little community straddling the state line along Route 66 in West Texas. Nowadays, its despair hits you before you even exit I-40. 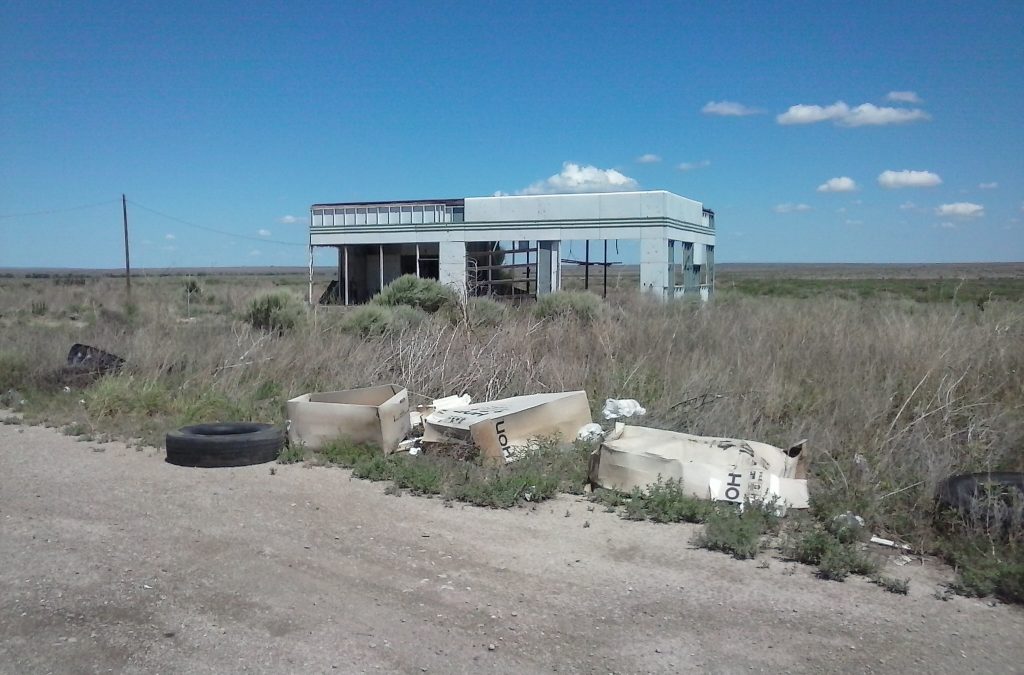 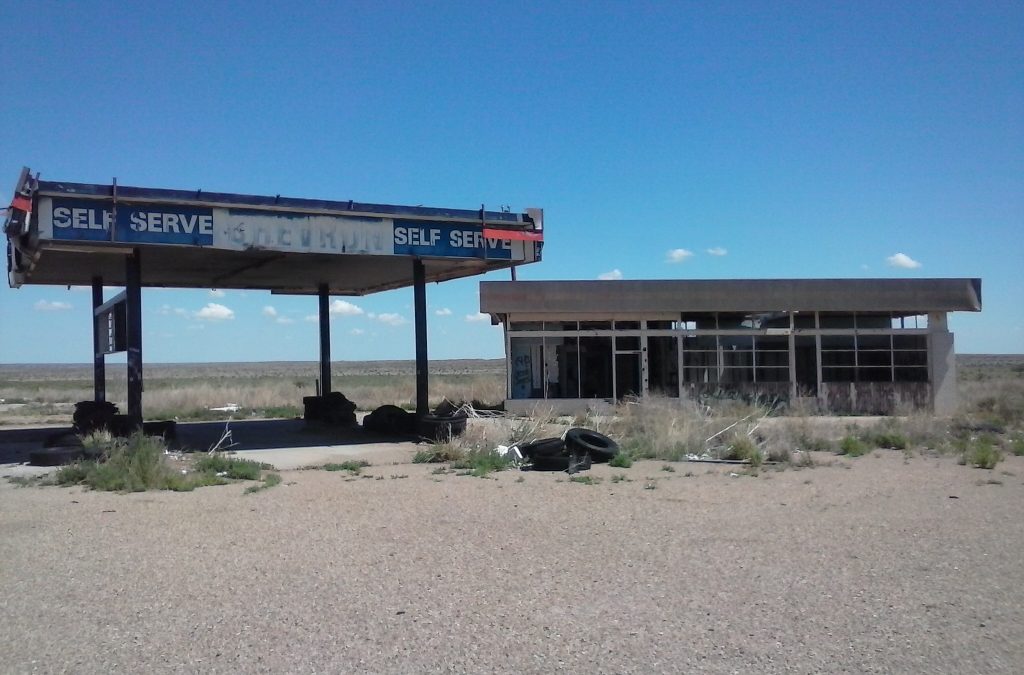 As Buzze A. Long drove into Glenrio, the sight and sound of bikers greeted me. They were modern-day bikers with 2 support cars. Probably bankers on vacation or tourists from Riga, Latvia. 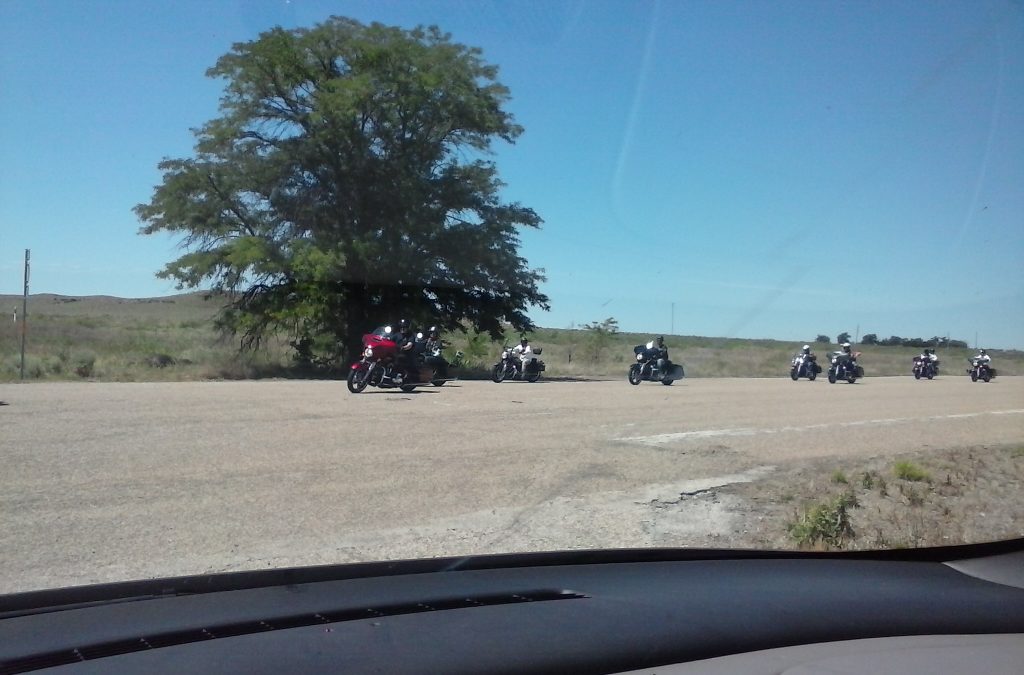 Bikers in Glenrio, TX on Route 66 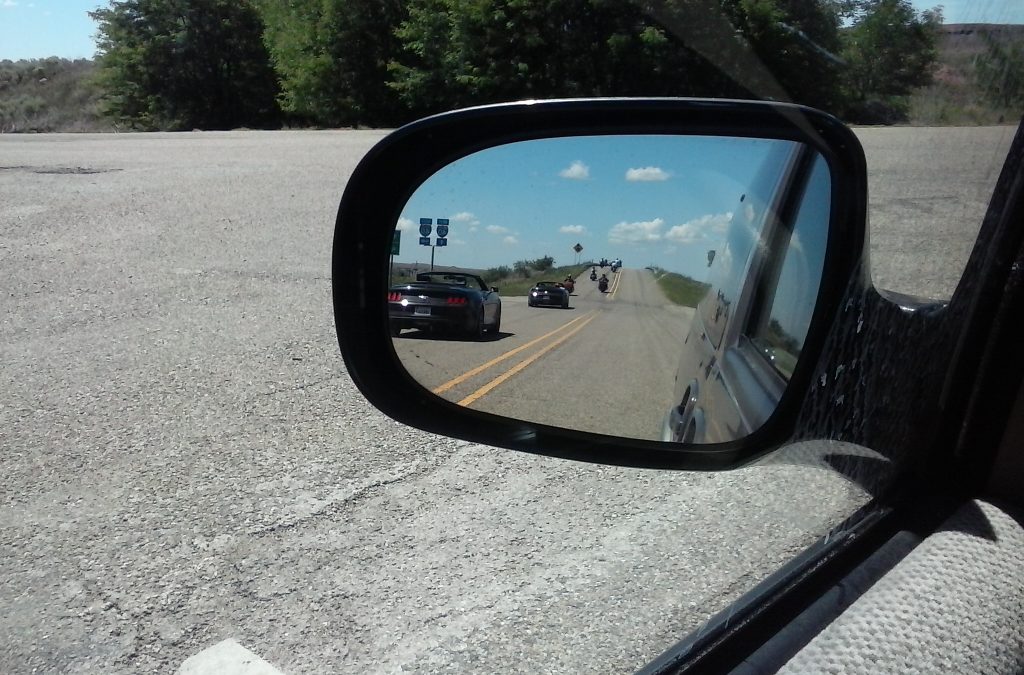 Bikers and Support In The Rearview In Glenrio

“Where in the hell are the Hell’s Angels?”, I wonder. On this entire trip, I saw nary a one. What’s the country coming to? 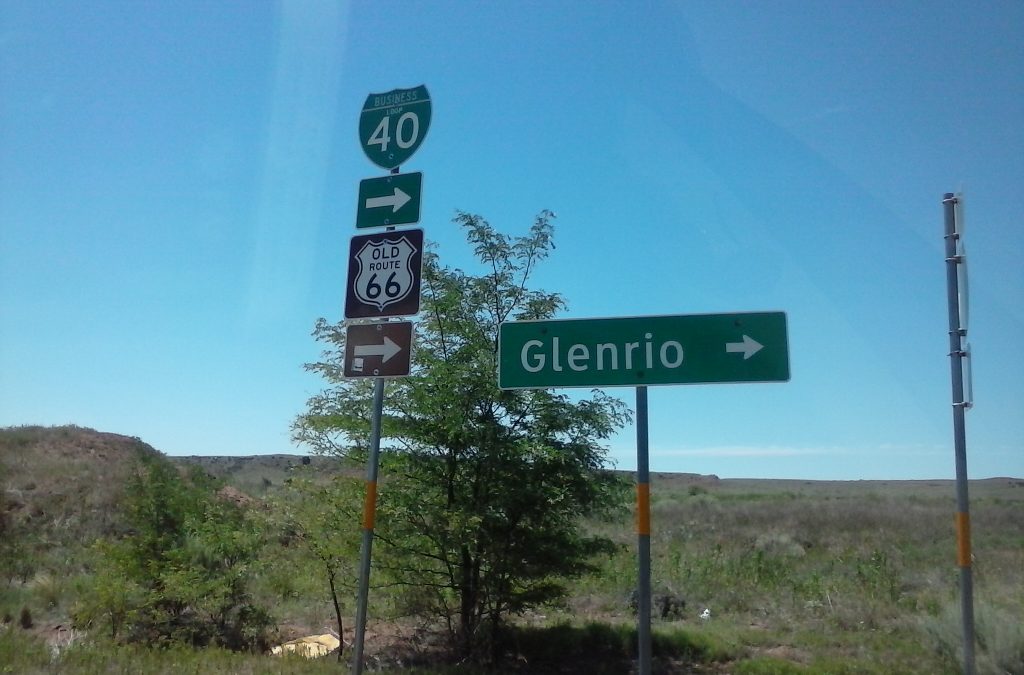 Just follow the ‘Business 40’ Sign on Old Route 66 to arrive in Downtown Glenrio. It is on the New Mexico State Line, in fact the suburbs flow over into New Mexico.

I arrived here in the early afternoon on a clear, bright sunlit day – which is no surprise, as most days in the southwest ARE clear, bight and sunlit. As you look at these pictures, the sky is a brilliant blue with just a few clouds. What a perfect omen for exploring this almost-a-ghost-town.

I have the town all to myself – except for a couple of permanent residents on the Texas Side. Dogs are barking. They are restrained and there are plenty of signs warning that this is Private Property and Dogs Are Around. I doubt that there is much left to steal, anything of value probably disappeared long ago. 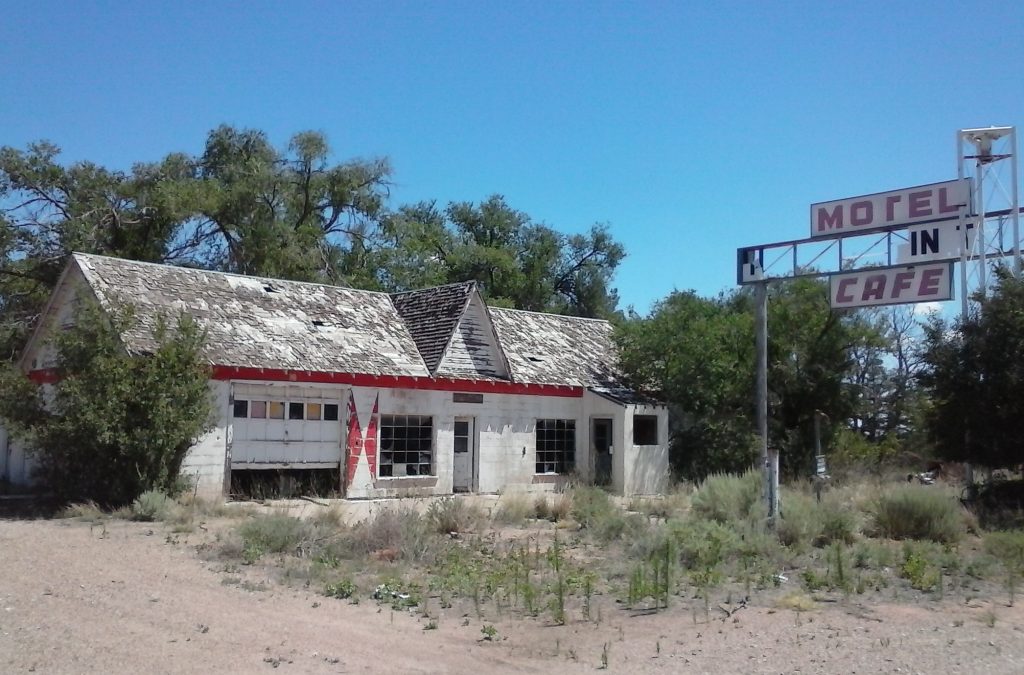 At the First in Texas / Last in Texas all that’s missing in the above picture is a sign that says,

No doubt, many people did –

Not a pane of glass left in town – not in one piece, anyway. As I wander around town, my imagination, never far away, begins to wander as well.

The Western breeze carries a small dust-devil across the half-full parking lot, followed by another. I’m surrounded by the noises of a lazy summer day on Route 66: the ding-ding as a newcomer from the east, kids’ heads poking out all the windows, drives over the hose signaling new business at the gas pumps.

the kids pile out, looking for the restroom.

It’s out back, in a new location this year as the old one had filled up. Little girls, 8 or 10, play jacks in the dust near the picnic table as their mothers, heads filled with thoughts faraway, look on absently.

Boys play marbles on the other side. A few cat’s eyes are up for grabs there. Other boys are huddled closely, getting ready to trade pocketknives with a stranger. Should they get some advice from their Dads first? “Nah, that town kid has a Barlow and I think I can get it”.

A boy comes out of the store with a bottle of Coke. “I want some!”, hollers a little girl when she sees him. He brought that 12 cents in his pocket all the way from Bado, Mizzurah and now his little sister wants him to share. “OK, but don’t spit in it”, he says, grabbing it back before she guzzles too much. He had to WORK for that 12 cents.

A young couple walks by, husband nearest the road. A little boy is between them, the index finger of each hand held by a loving parent. “Stick close by, son, don’t get lost”. I wonder where they are headed. I wonder if they will make it.

are looking under the hoods of cars of various ages. They rummage beside the picnic area, added new just last year, looking for pieces of rope. They tie ropes together, then use the ropes to reinforce the deteriorating ropes already tied around their deteriorating possessions which decorate the car. “Heard it’s steep out around Oatman“, thinks a man as he looks at the horizon. “Don’t want this stuff falling off, might need it in Californey“.

toughened by the experiences they left behind on Route 66 to the east of them, look at the horizon and wonder if they have what it takes to get through the desert, the REAL desert, that they heard is waiting out near Kingman – on Route 66 to the West of them. “It’s drier than West Texas?”, they wonder, “Drier than I ever seen, here. What could be drier?”.

Later on, they’ll find out.

Little boys look up at their Dads, their heroes, and feel good because their Dad is taking them on an adventure to The Promised Land.

Teenage boys, who are tall enough to see better into their Dad’s eyes, wonder what they are seeing there. “His eyes never had that look back on the farm”, they wonder, “What is it?”.

Dads look at the horizon, then the sky, then look even higher, searching for God. These Dads have lived the past; they’re gambling on the future. They’re the breadwinners. Leaving everything behind was the hardest thing they’d ever done, but it seems easy compared to the unknown now lying ahead. Six kids, a wife and a pickup truck with bald tires and a little slap in one of the wrist pins. “Can’t let them know that I didn’t know what I was doing when I packed them all up and headed West. The Golden State better have a little gold in it for me – for their sakes, not mine”. A barely perceptible shake of the head in the “No” direction, a slight straightening of the shoulders and Dad moves on with more resolve. He’s only got a week to figure out What To Do When He Gets There.

God looks down, wondering what their next step will be.

A car drives up with those new-fangled electric windows open. Laughing kids are holding pinwheels outside, almost worn out since being bought new back in Amarillo. No problem, the sign said there’s more stuff at Flying C Ranch, only 200 signs away.

“You kids better use the bathroom while we’re here. Albuquerque’s a long ways off yet”.

Near the door to the cafe, kids are trading bottle caps to put in the spokes of their bikes, forgetting that their bikes are back in Oklahoma, forever.

A few firecrackers go off across the street. A week until the Fourth.

The spring creaks as I pull open the screen door

of the cafe. It creaks again as the door slaps closed behind me. I swat at a couple of flies as my eyes adjust to the semi-darkness in the cafe. A big fan hums on a stand in the corner, streamer standing straight out to prove that it’s turned on. The fan is sweeping back and forth in an attempt to discourage the flies. It isn’t working. A couple of kids are lying on their bellies, spinning on the stools as I walk up to the counter.

It all happened here long ago, but not too far away, on a lazy summer day in Glenrio, Texas. I can feel it.

A semi’s horn rides over the wind from I-40, bringing me back. Time to get back into the Mystery Montana. The Mother Road and The Great American West are waiting for me … 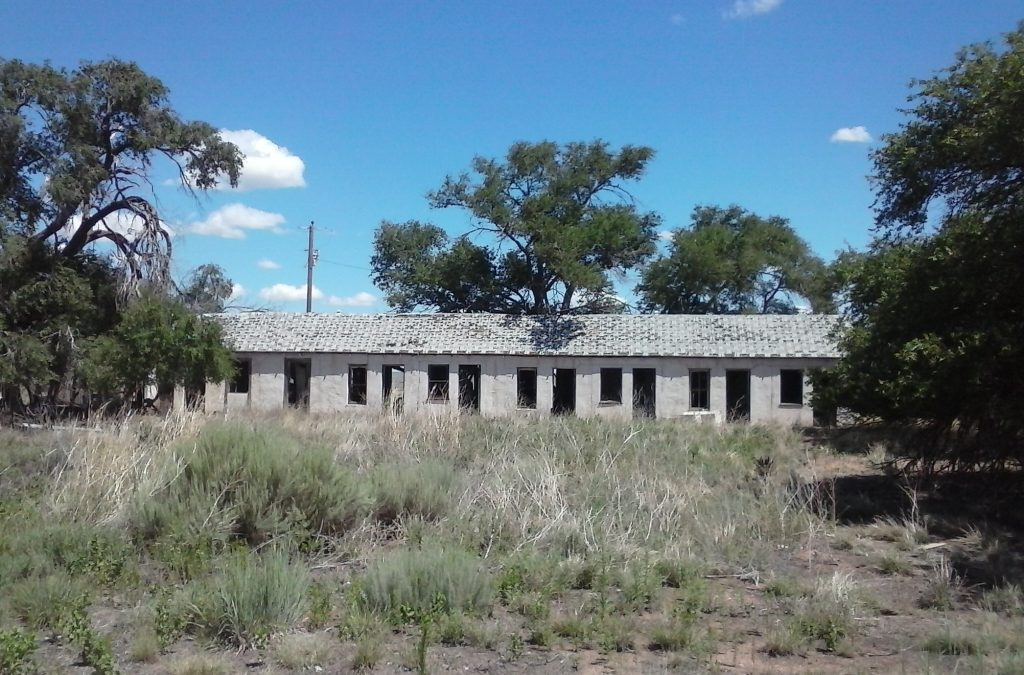 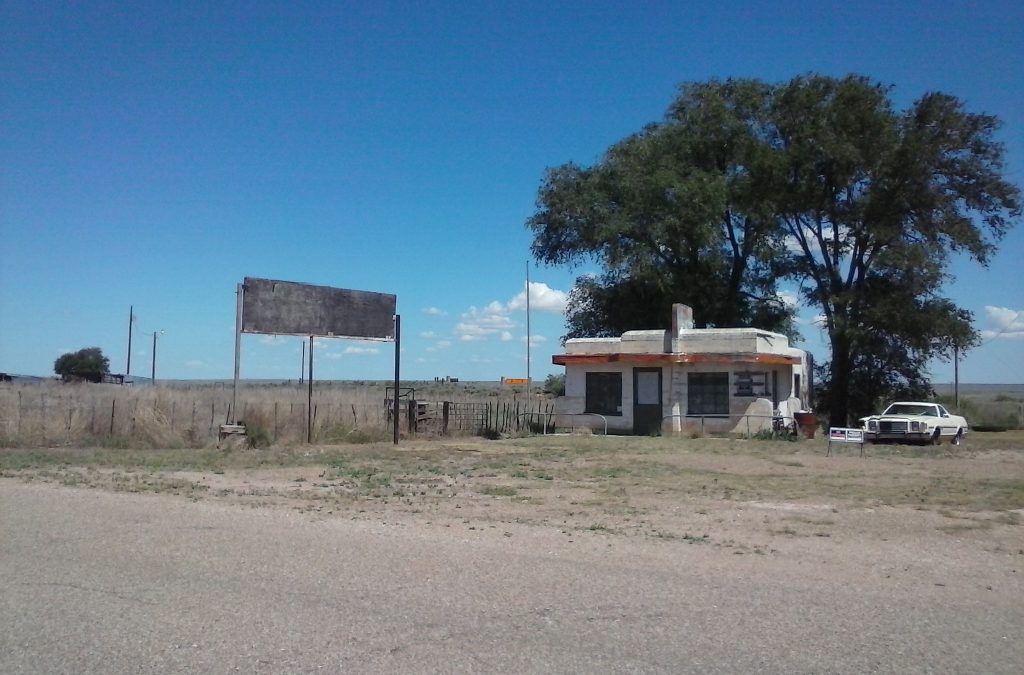 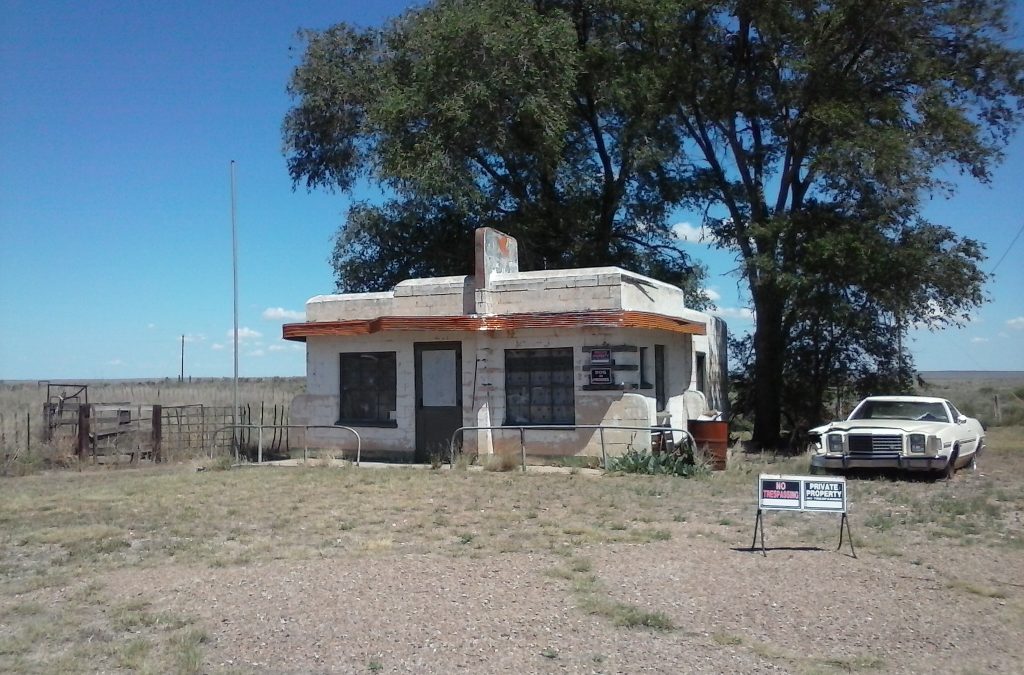 Stop for Dinner in Glenrio 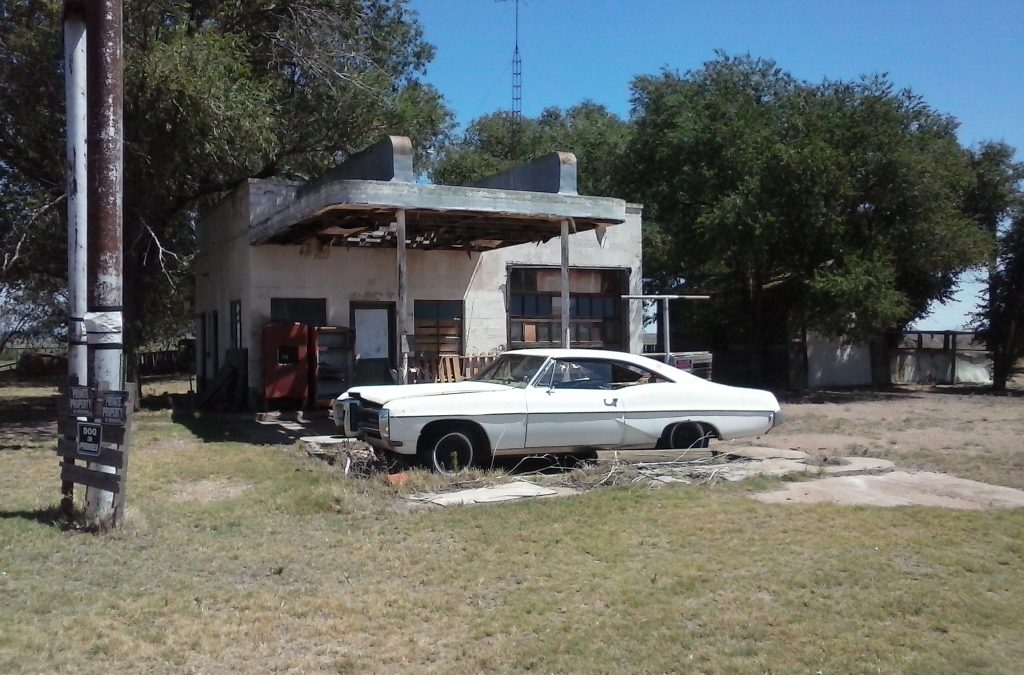 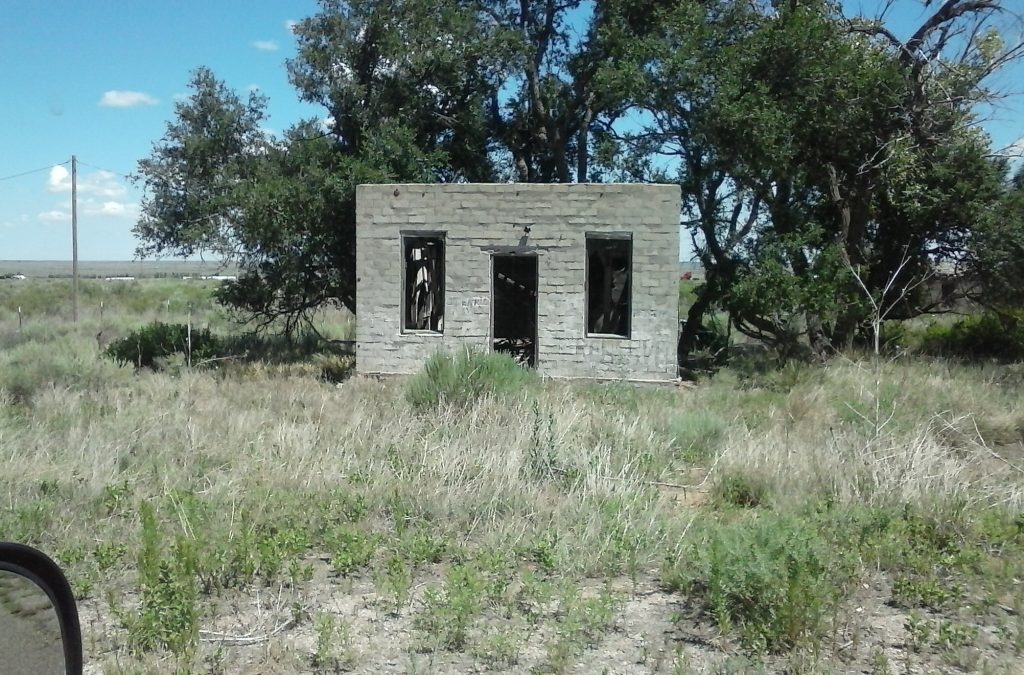 Deserted Building On The New Mexico Side 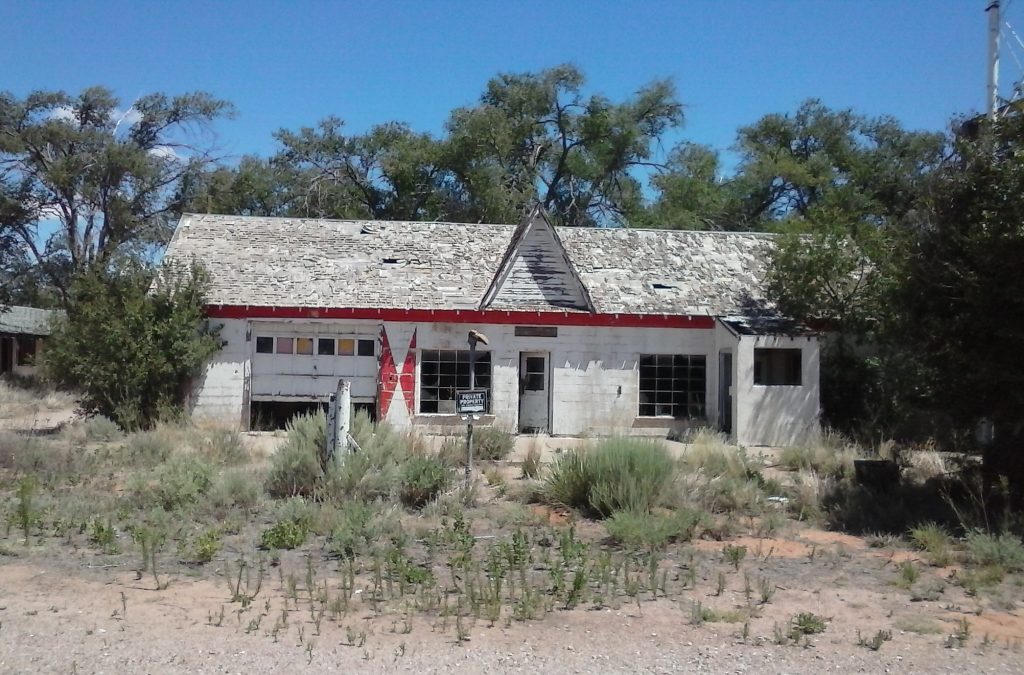 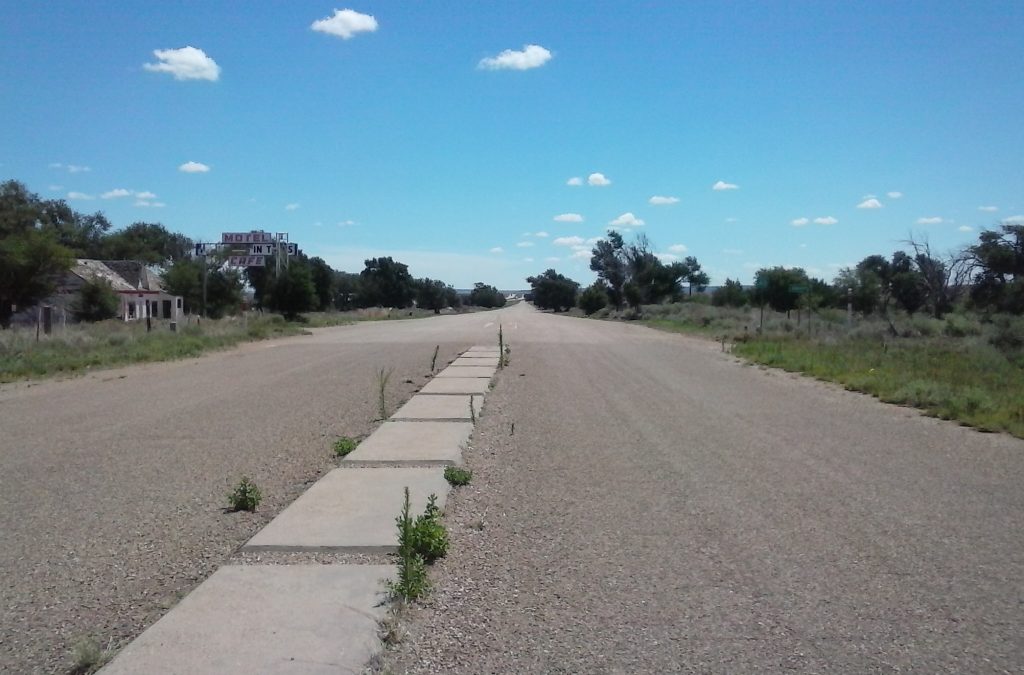 In New Mexico, Looking East Along The Route 66 Divider 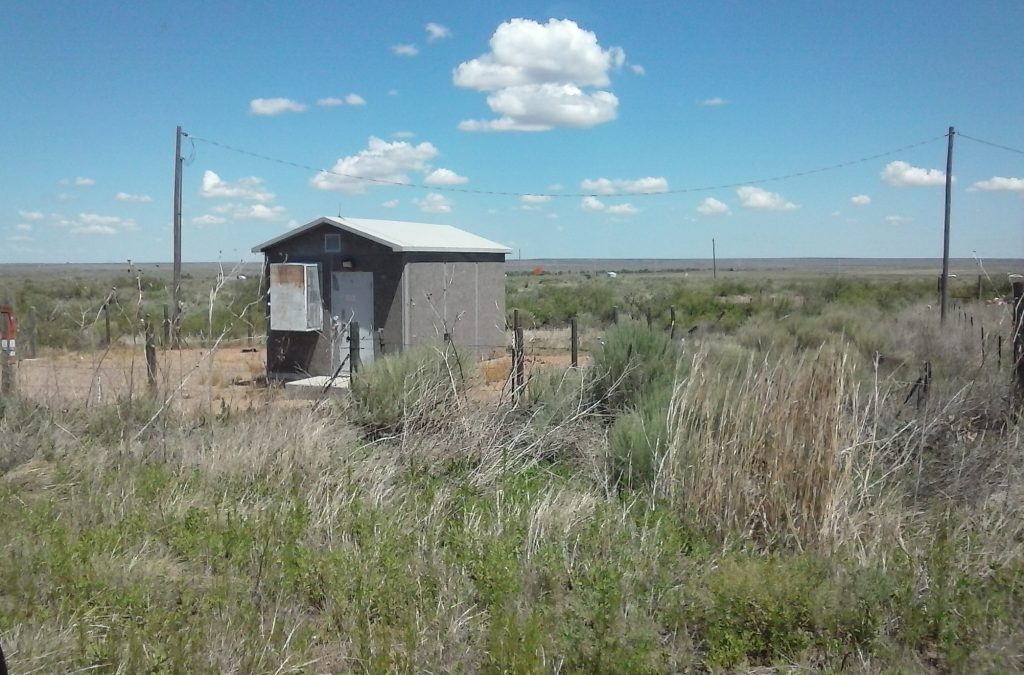 The Only Modern Building in Glenrio, TX Is In New Mexico 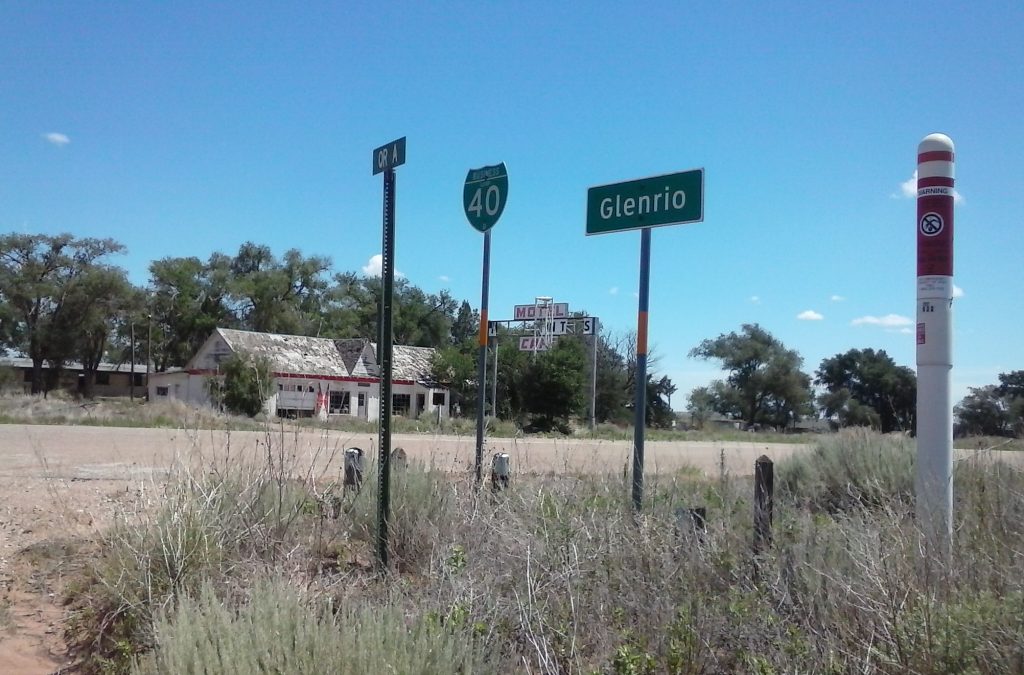 Standing On The State Line In Glenrio, TX 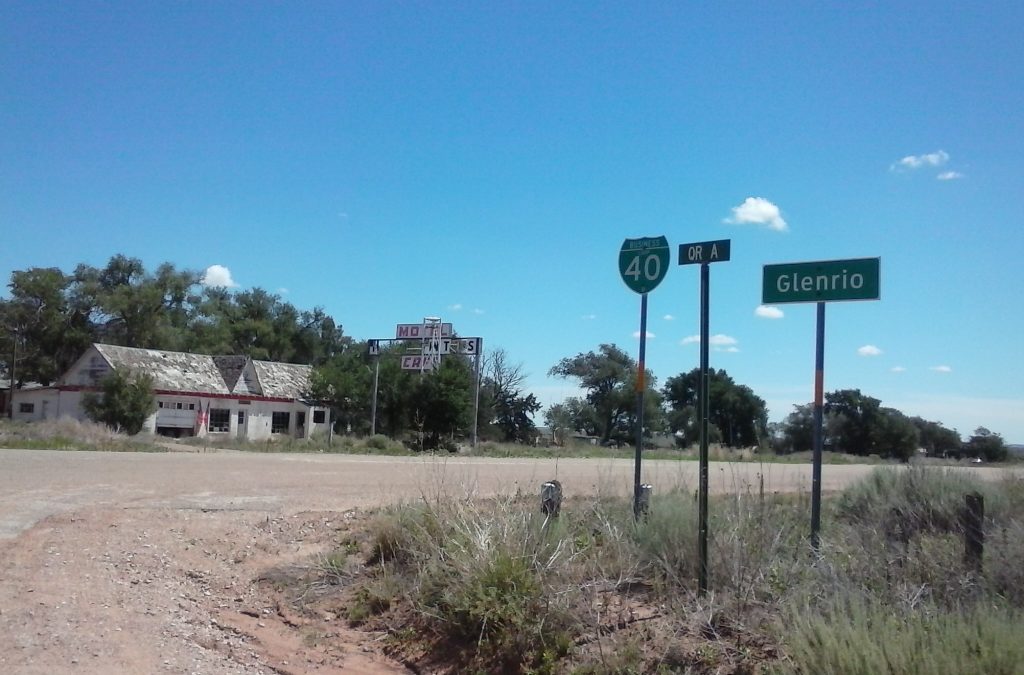 Standin’ On The Corner In Glenrio, TX

Somehow, ‘Standin’ On The Corner‘ here just doesn’t have that ‘ring’ to it. Congratulations, Jackson Browne, you got it right. 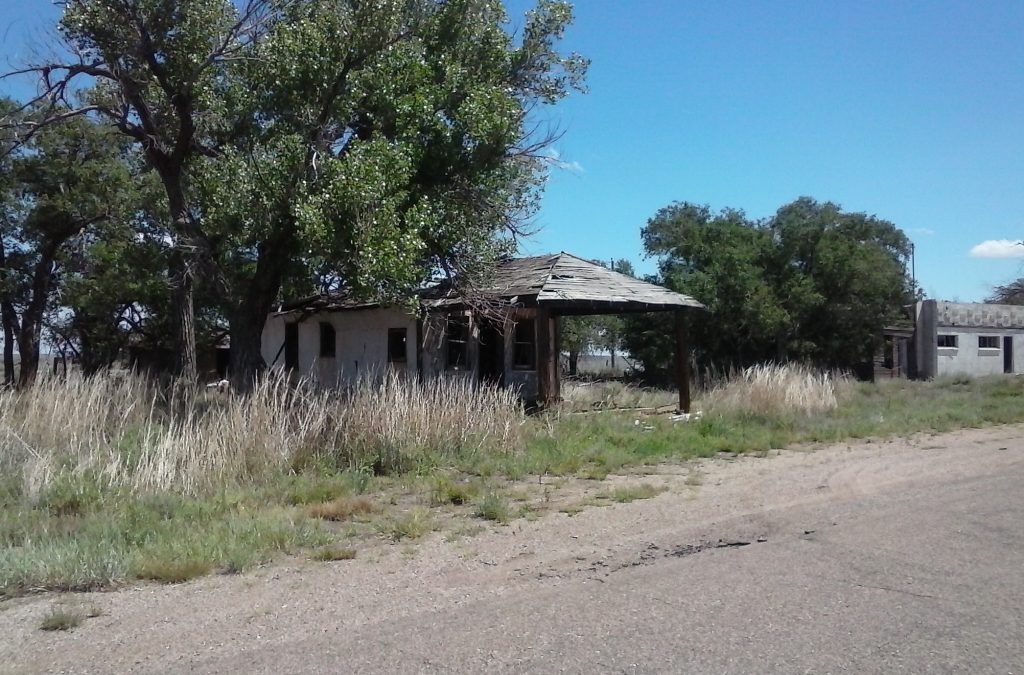 Historic Gas Station In The Suburbs 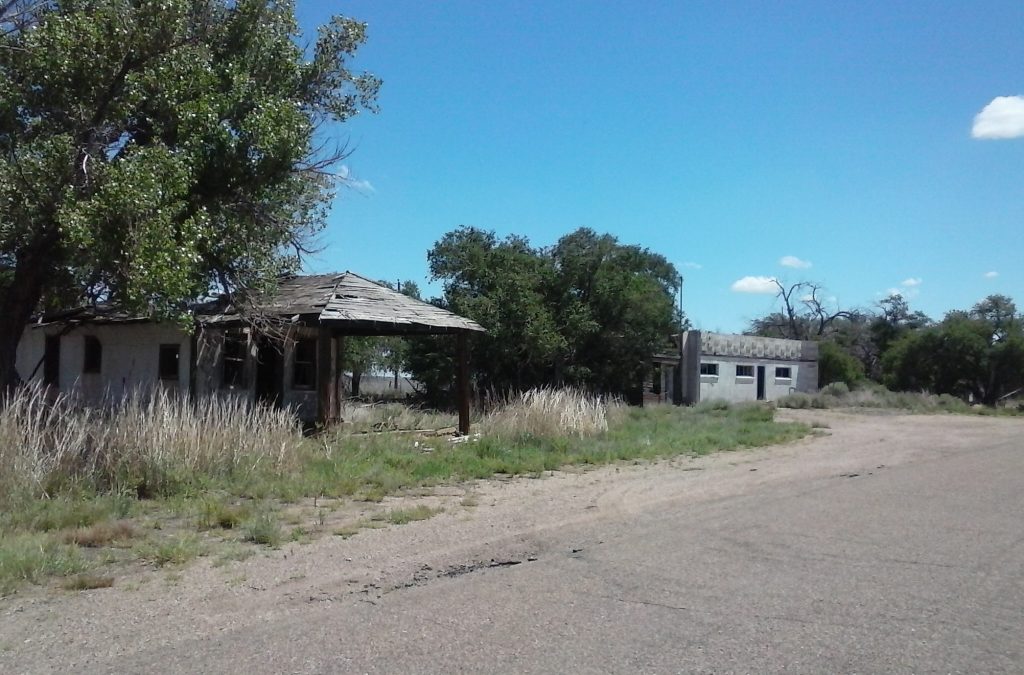 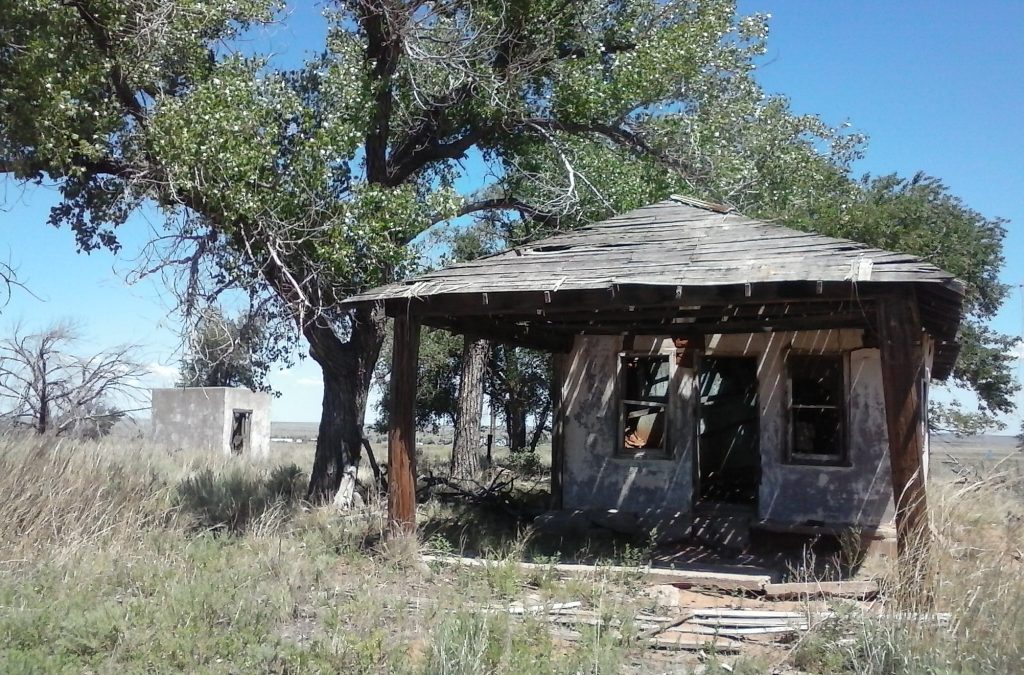 No Shirt, No Shoes, No Pumps … 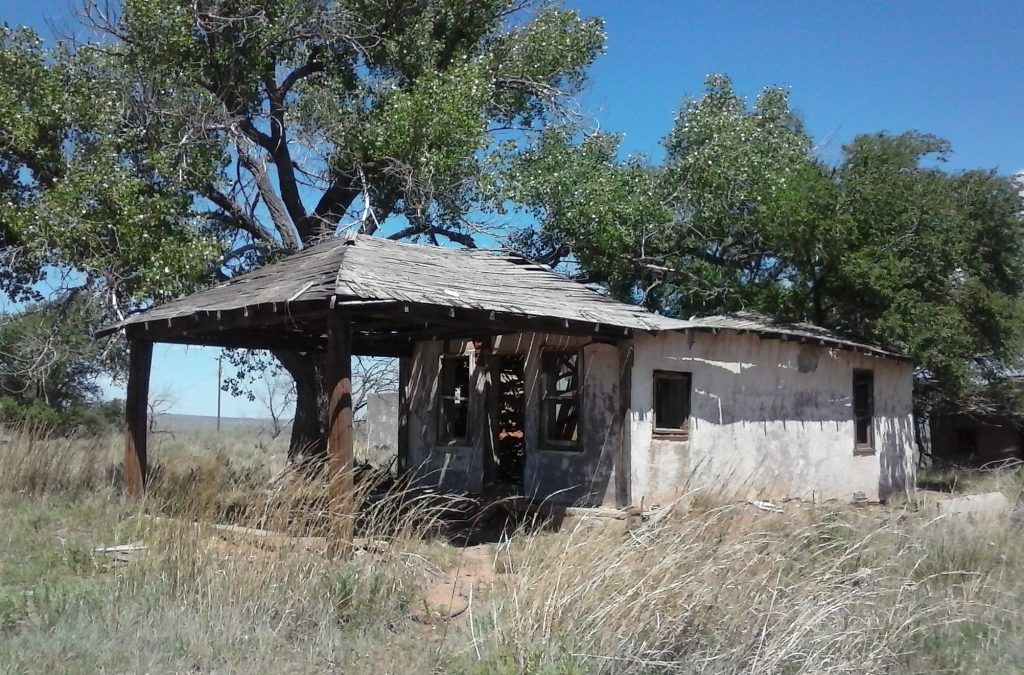 One reason for Glenrio’s demise is to the north in this photo – Route 66’s replacement Intersate-40. If you look closely, you can see a semi traveling east. 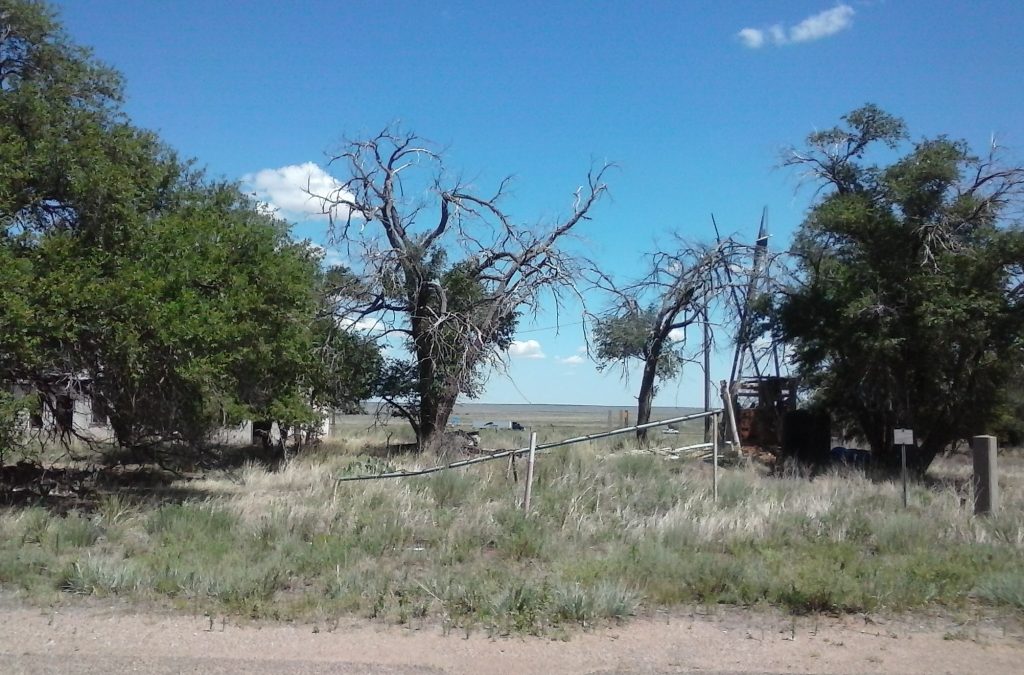 Get Your Kicks on Route 66 By Stopping in Glenrio, Texas 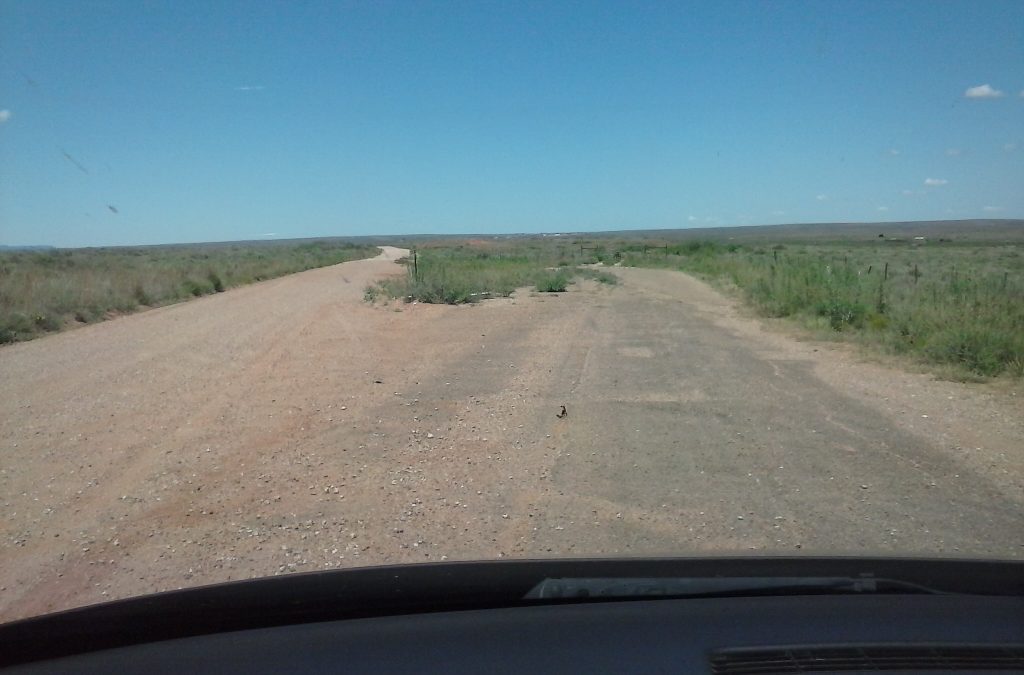 Route 66 Is Dirt To The Horizon 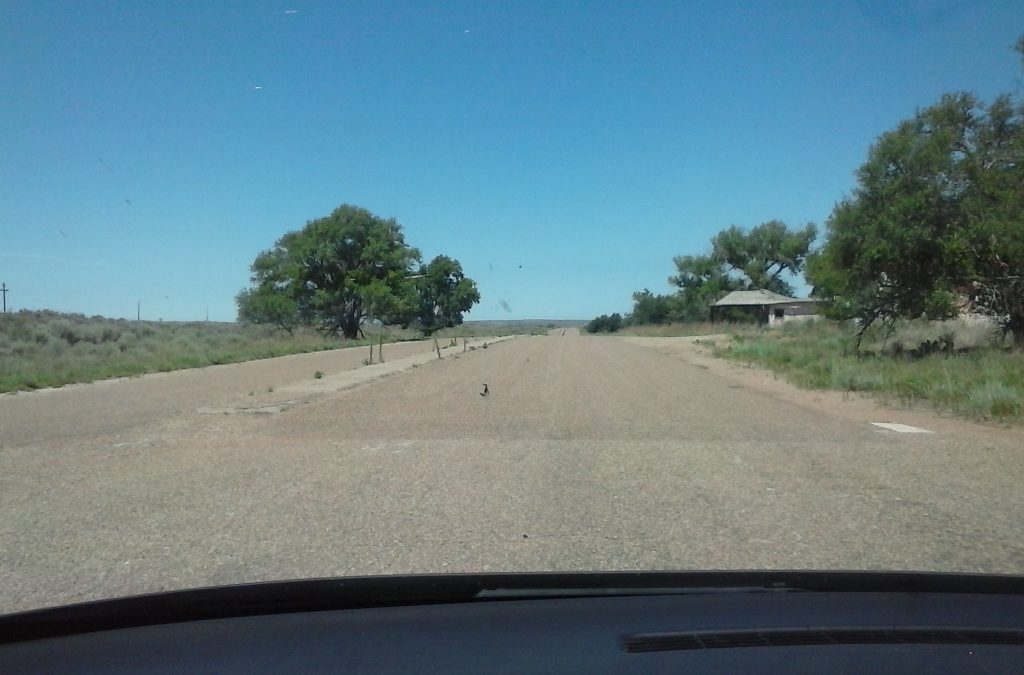 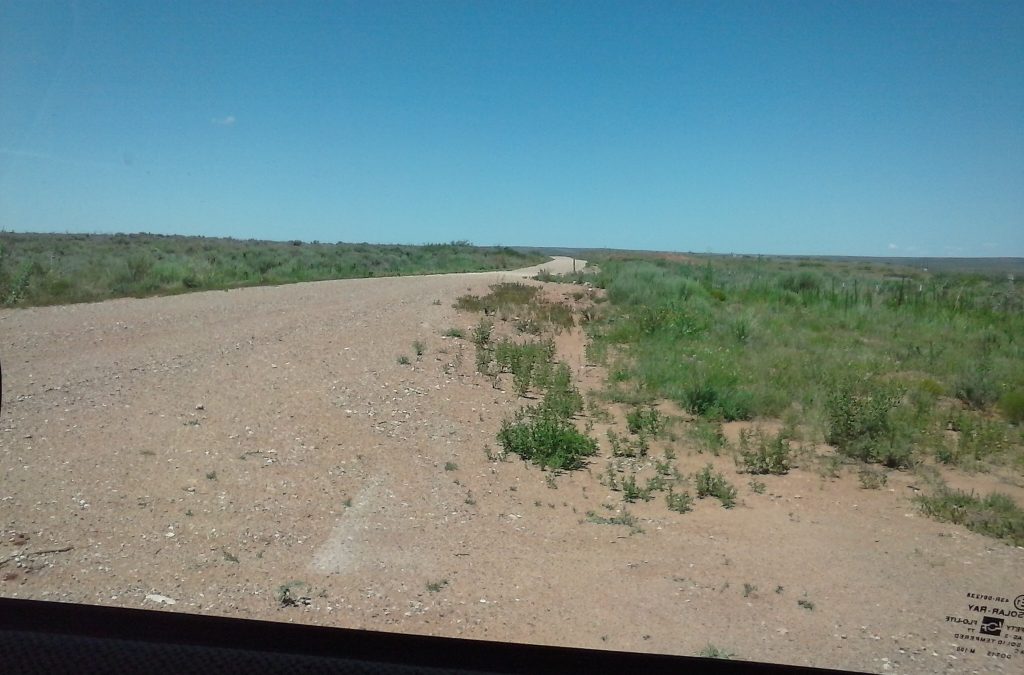 How Many Travelers Have Disappeared Over This Horizon? 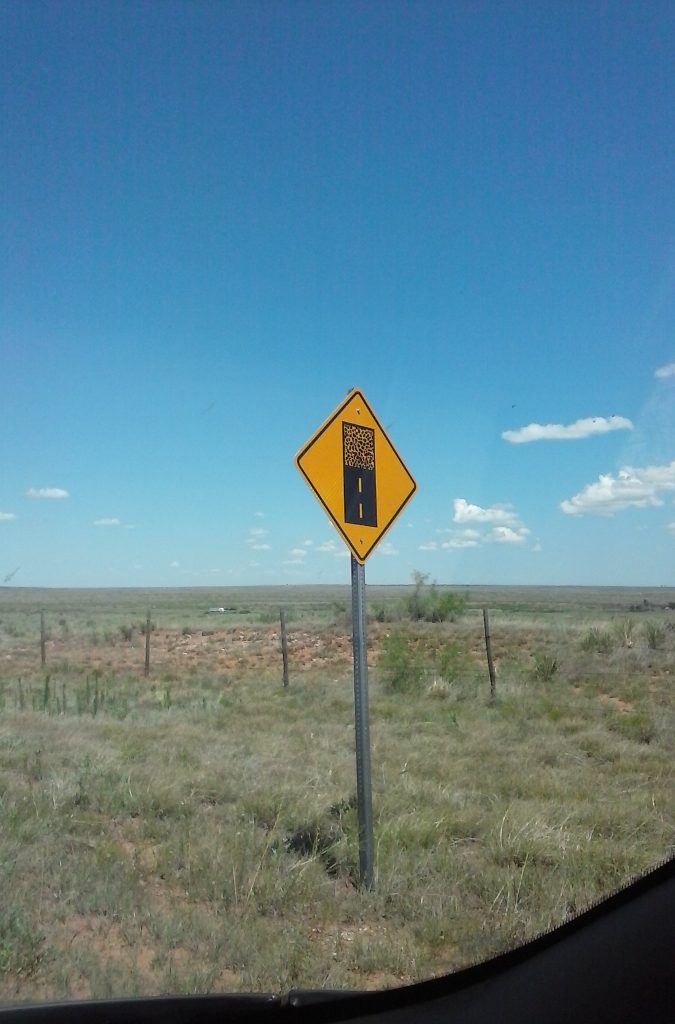 The ‘Burbs of Glenrio, TX are over here in New Mexico. 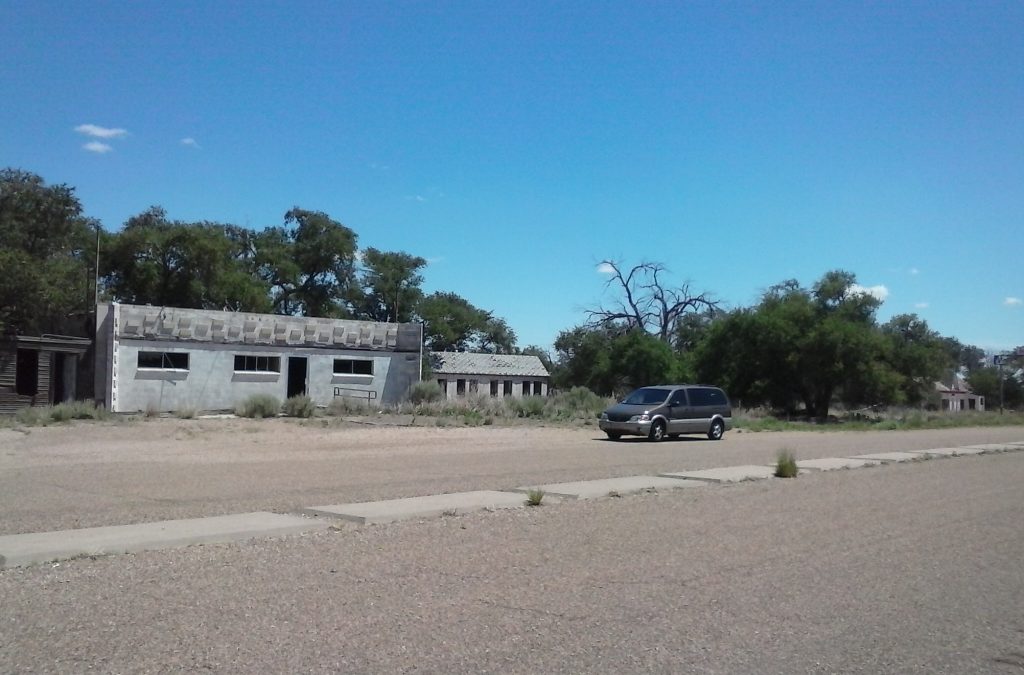 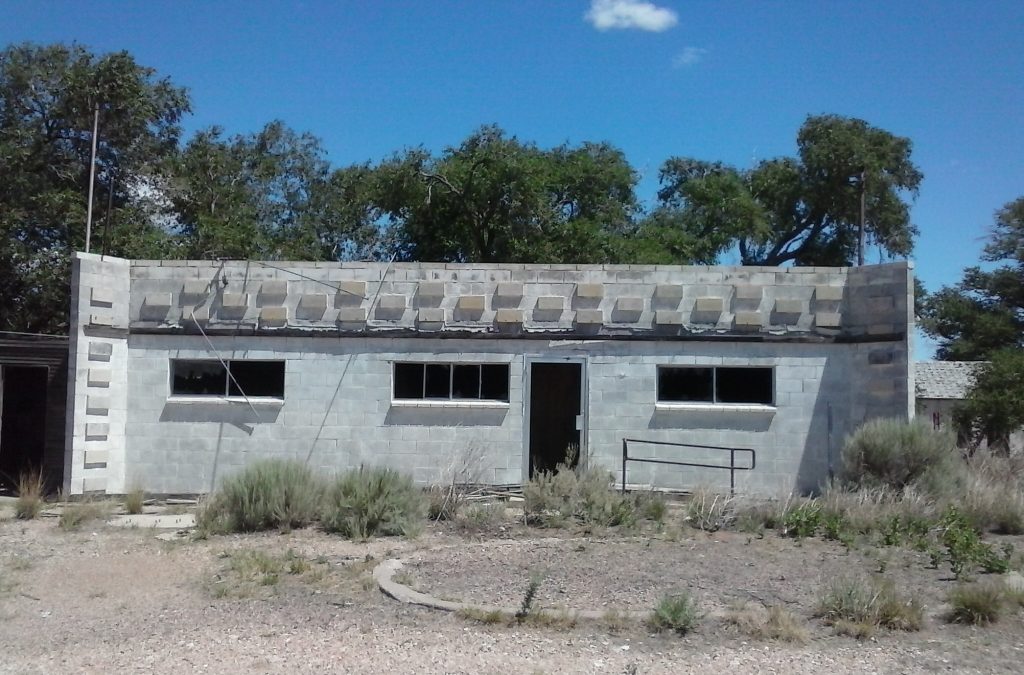 Post Office? Convenience Store? Did It Birth The Idea For 7-11?

Circle K Has Nothing On This Historic Buliding

Buzze A. Long, on a lazy summer afternoon, reporting from Downtown Glenrio, Texas

Love the fact that you made a story from your imagination of this town. Wonderful

Thanks for the good words!

The last picture is State Line Bar where a real tragedy occurred in 1973. After this tragedy they bar never reopened. Read the Tragedy of the State Line Bar, Glenrio https://neverquitelost.com/2018/07/27/the-tragedy-of-the-state-line-bar-glenrio/

Thanks for reading, and thanks for filling us in on the history of Glenrio.