Just soaking up the solitude and relaxing at the secret compound. Smelling the pine & juniper. Driving around town and getting re-acquainted. Also noticing that changes that have occurred  since I moved away.

Here a couple of shots taken on an old alignment of Route 66 between I-40 and the Mall. 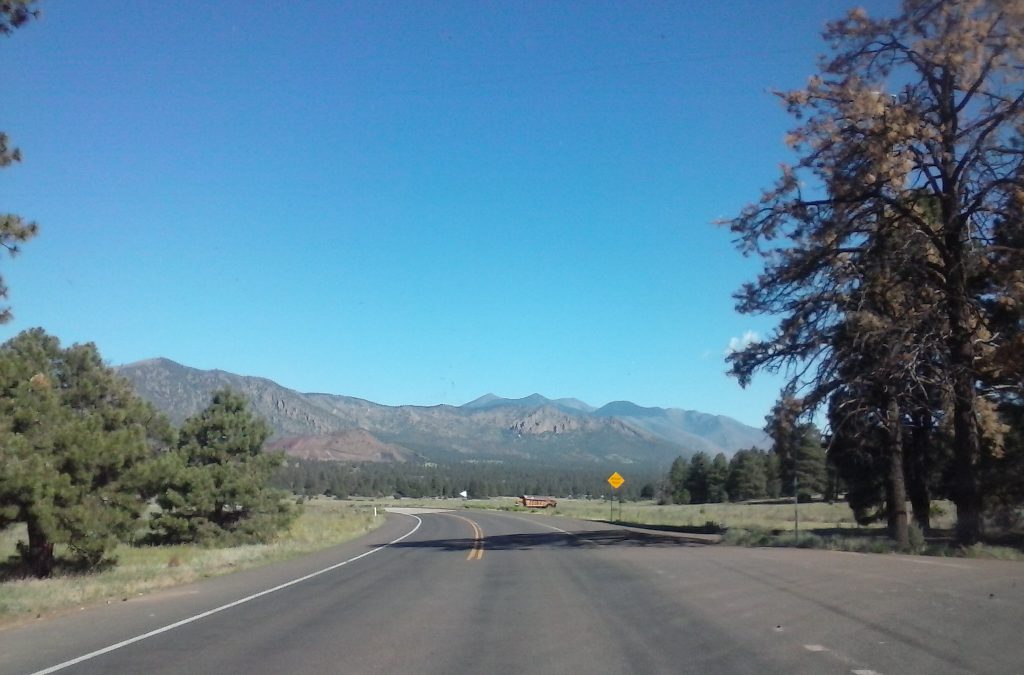 A little further along this old machine is sitting in the morning sun, east of the Rio de Flag crossing: 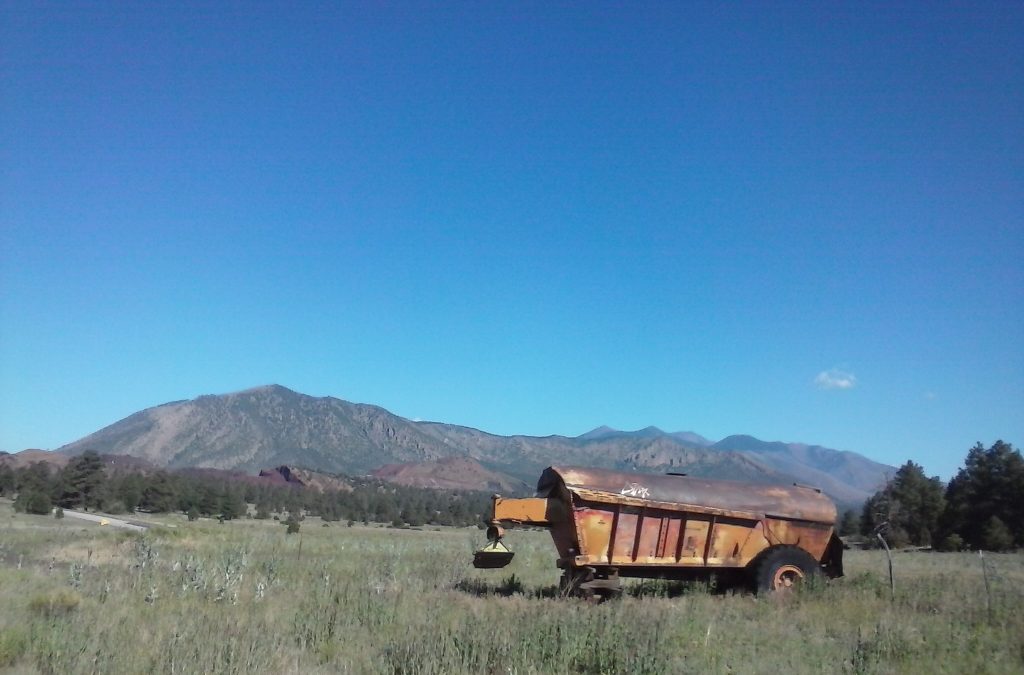 Serene Machine Seen On The Green

Here in Flagstaff, I am loafing, resting and visiting with friends & family. They left the latch string out and my shirt is just where I left it last time. They even had the coffee pot on! 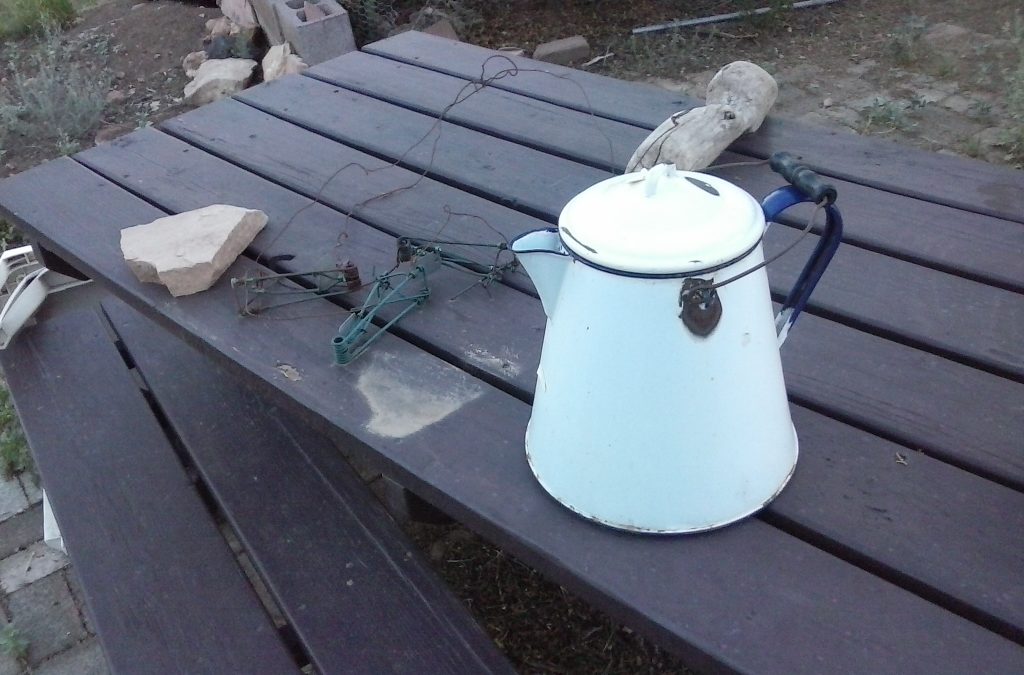 Spring For Some Coffee On An Old Alignment Of U.S. Route 66

Good to be back in my old house.

I’m updating the blog from the secret compound as we speak.

I’m in Flagstaff from June 29 through the morning of July 5th, which gives me time to drive through some of my old stomping grounds. I drove by the World-Renowned Museum Club (c): 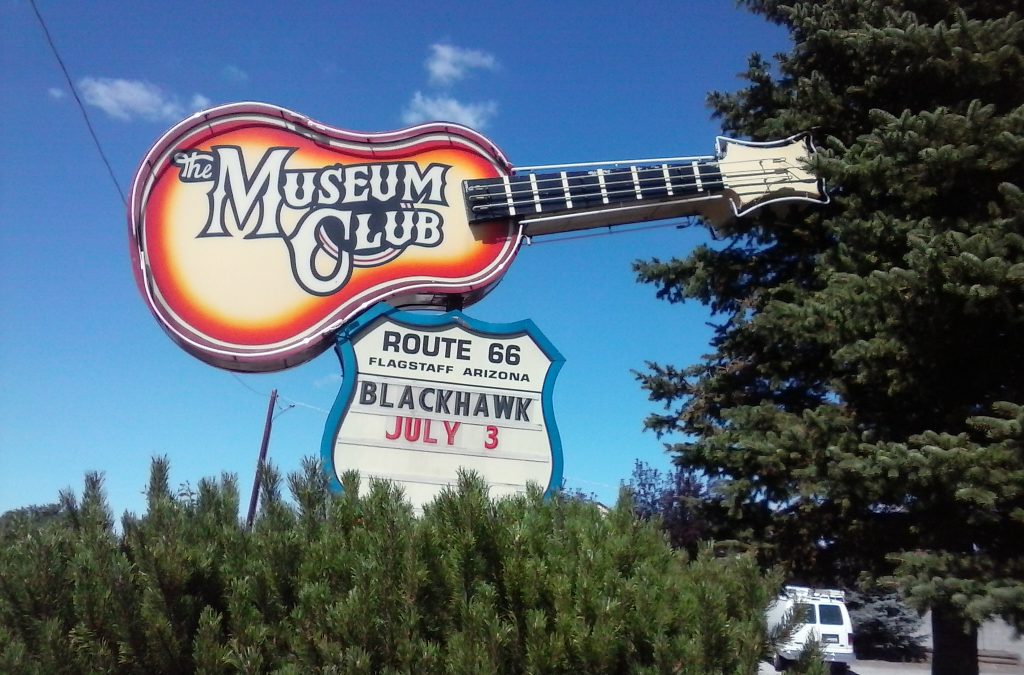 Enter Through The “Y” Of The Tree On July Three !

A little west of the Museum Club a dude pulled up behind me on a sidecar. Don’t look now but his passenger must have fallen out. Or maybe it’s a cat. Or a dog. Or his pet turtle: 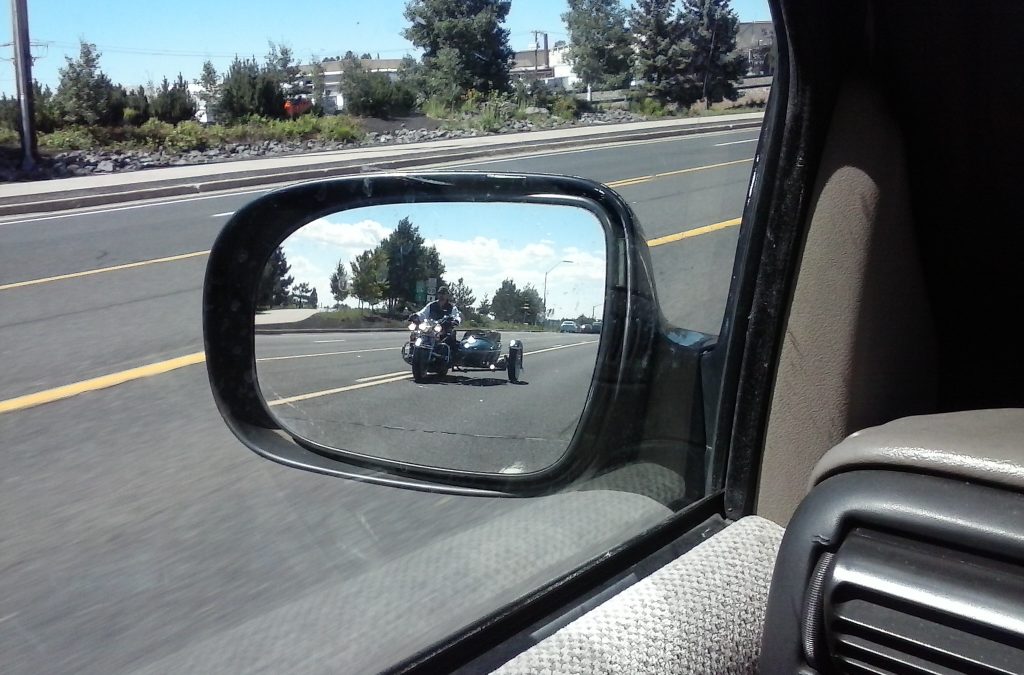 Sidecar Beside MyCar on Flagstaff Route 66

Which reminds me of a story that happened a day after that picture was taken. I was sitting on the corner in Flagstaff, across the street from the Blue Lodge (R) . A motorcycle traveling west had to stop for the light. The motorcycle had a sidecar attached, and inside the sidecar, serious as a judge, sat a little dog. The dog not only had goggles on, it also had a doo-rag and a riding vest.

Behind the motorcycle/sidecar came another bike with the wife/girlfriend ( maybe she was both ).

Guess the brand of motorcycles.

Much shuffling of riding boots, gearshifting, jiggling of the bike and starter-grinding ensued. Then the guy hollered back to the second bike, “Clutch cable broke – I’m gonna try to start it in first gear with the clutch engaged – I think it’ll work!”

For the first few feet, every time the engine fired the dog’s head snapped backwards.

Away they went, right turn at the light and up over the hill.

Guess the brand of motorcycles. Oh, I already said that …

FLG is a great city, but downtown parking can be a challenge. Parking most places is free, with a limit of an hour or two. Hint: you may be able to park longer near the library.

Which reminds me of another story, which happened 2 years earlier, as I again was visiting family in FLG.

I was downtown and it was early in the monsoon season. I had the wipers of the mystery Montana (R) going. I stopped downtown to do some window shopping. It took an hour or so. It was raining pretty had when I came out of the guitar store, so I ran across the street, jumped in the car and started it immediately to get the heater going.

The wipers kicked on right away, and I thought I saw something fly away: or was it just my imagination?

Now, back to the present: 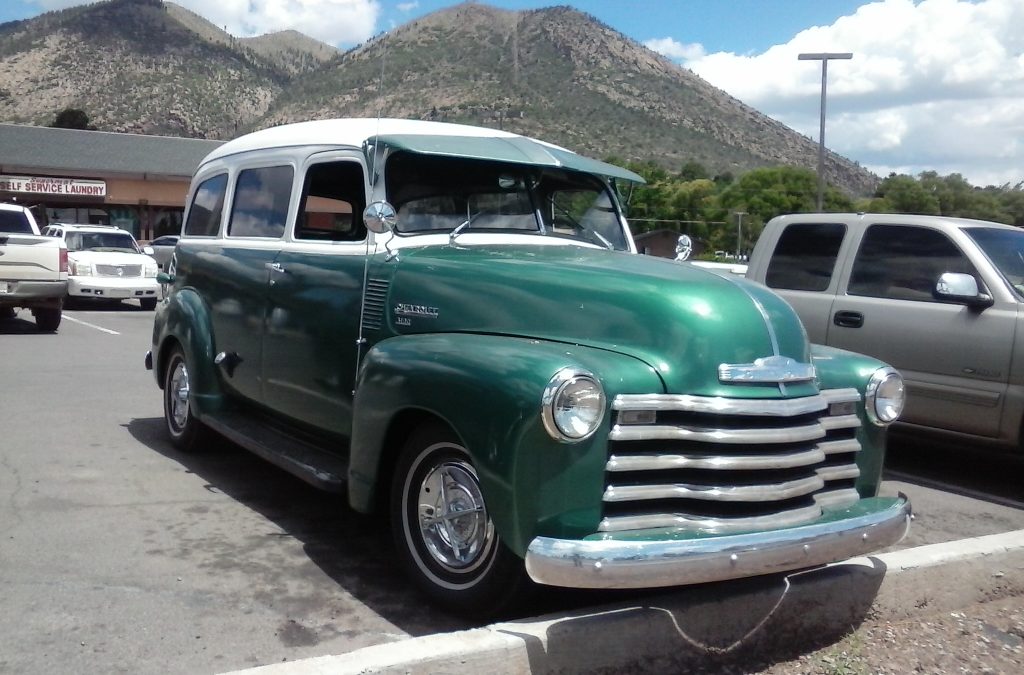 A little further west I made a right turn at the Farmer’s market: 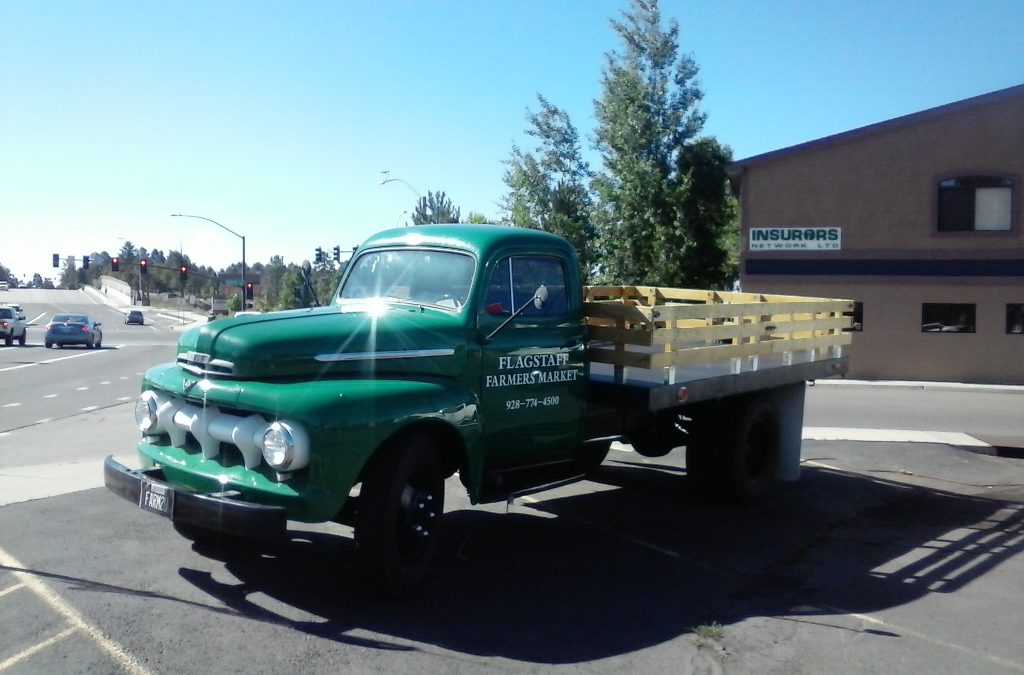 Get A Grub Stake At This Stake Bed

then continued up North 4th Street for a photo-fin-sh; 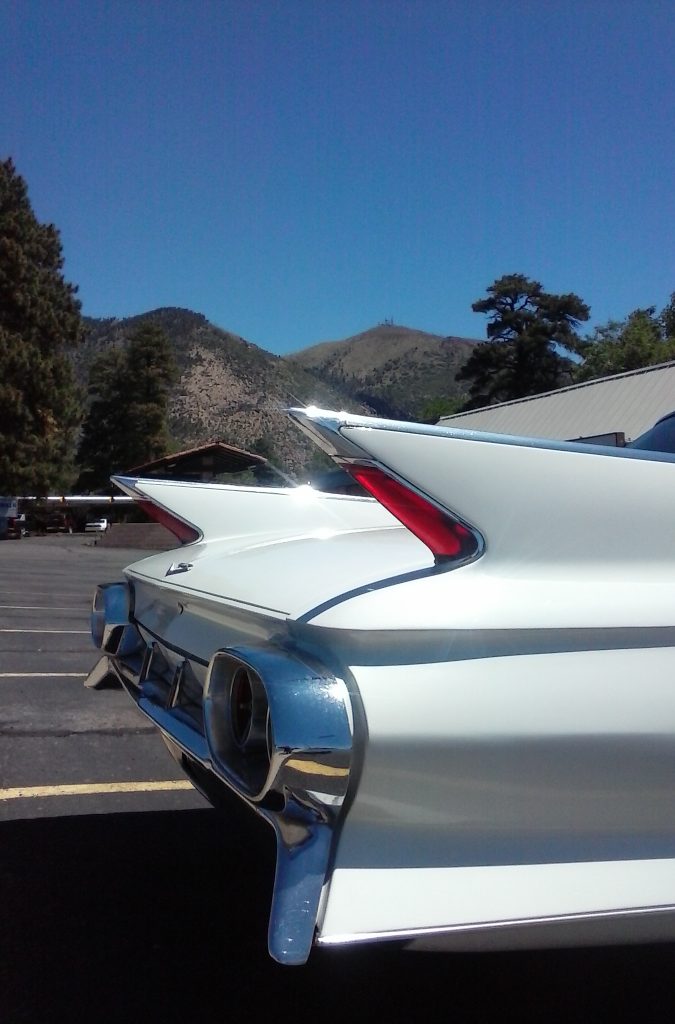 Fins In The Pines – A Classic Caddy Glints Against Mt. Elden

This old early-sixties Caddy was in pretty good shape. Nearby, Old Glory and the Arizona State Flag kept a silent vigil over our freedoms. 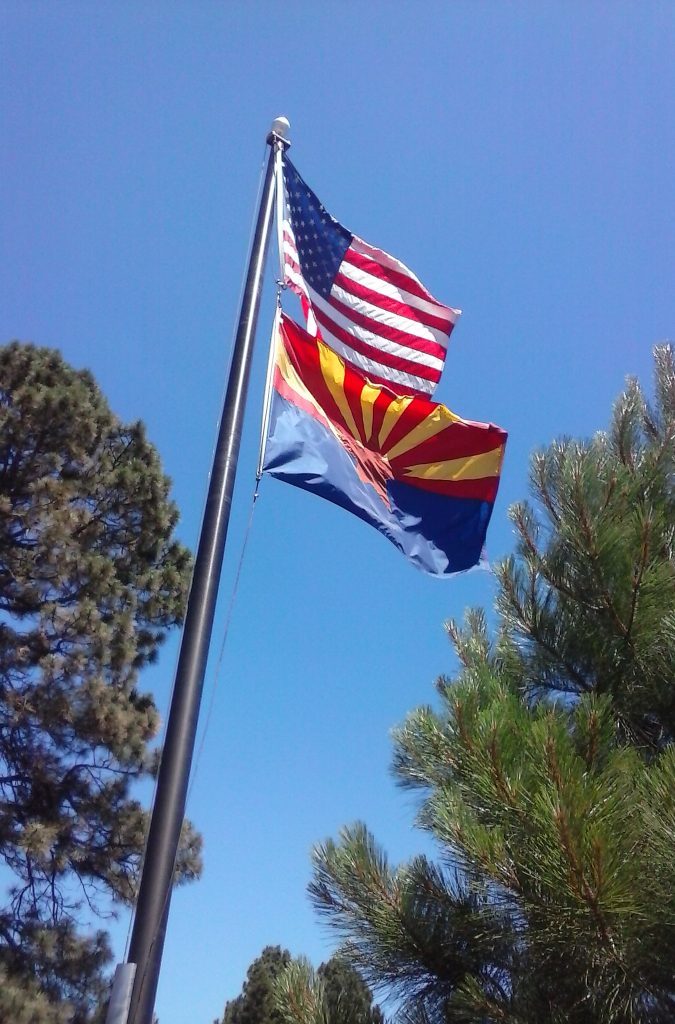 Old Glory Snaps in the Breeze Over the Arizona State Flag

Back on The Mother Road, an old motel sign stood in the sun just east of the Ford Garage: 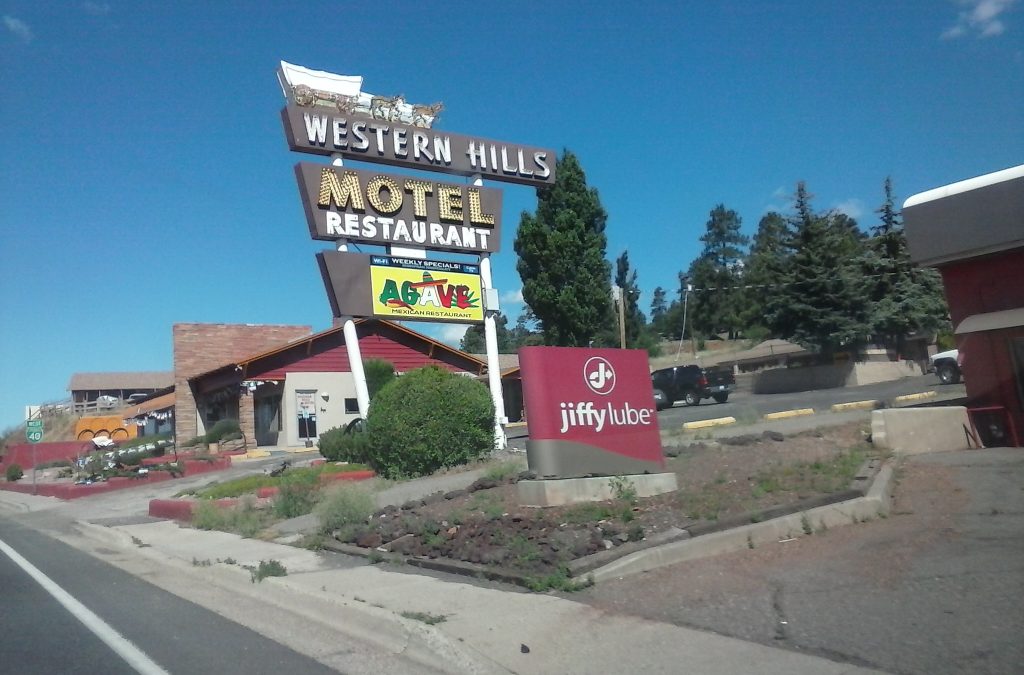 Wagon On In To Western Hills

A quick dip under the tracks and I came upon this fella just enjoying the cool morning mountain air: 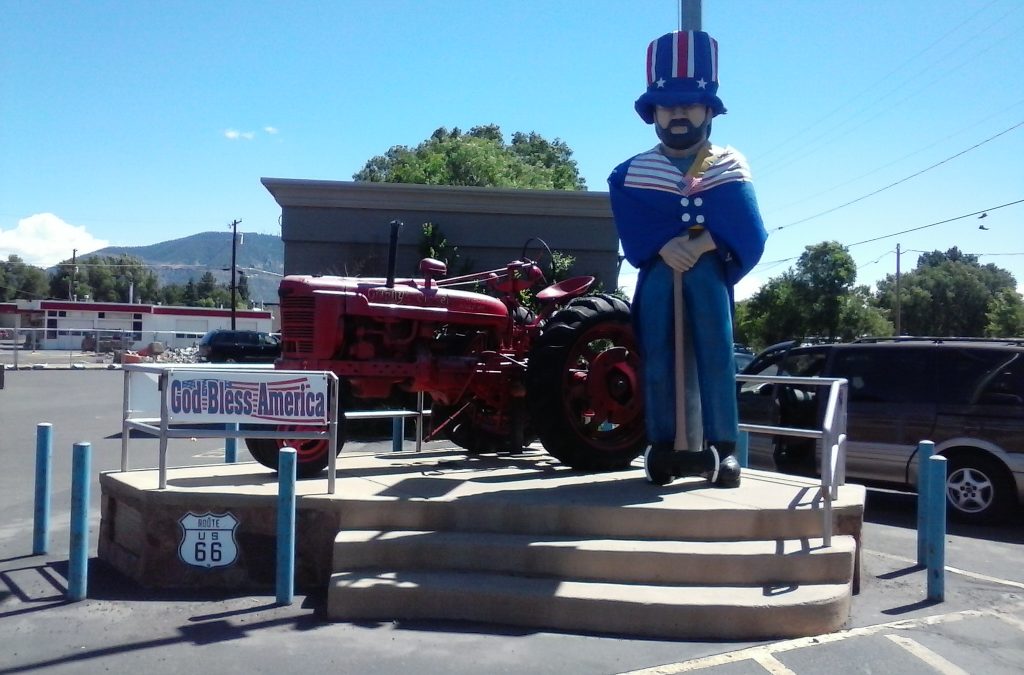 Then it was through Old Town and on to New Town for a well-earned refreshment on The Strip: 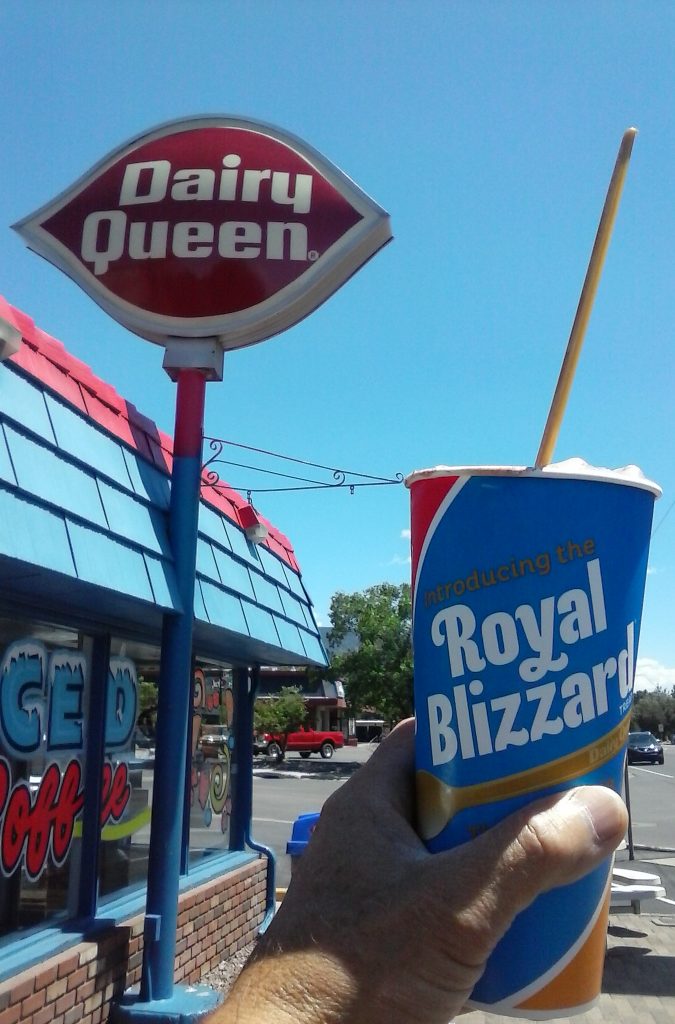 Blizzard in Flagstaff, AZ on The Fourth of July!

This Flagstaff Blizzard on The 3rd of July was twin kin to the one I had recently in Rolla, Missouri – pronounced “Mizzurah” by those lucky enough to be born there.

Then what ( yet again ) to my wondering eyes appeared: 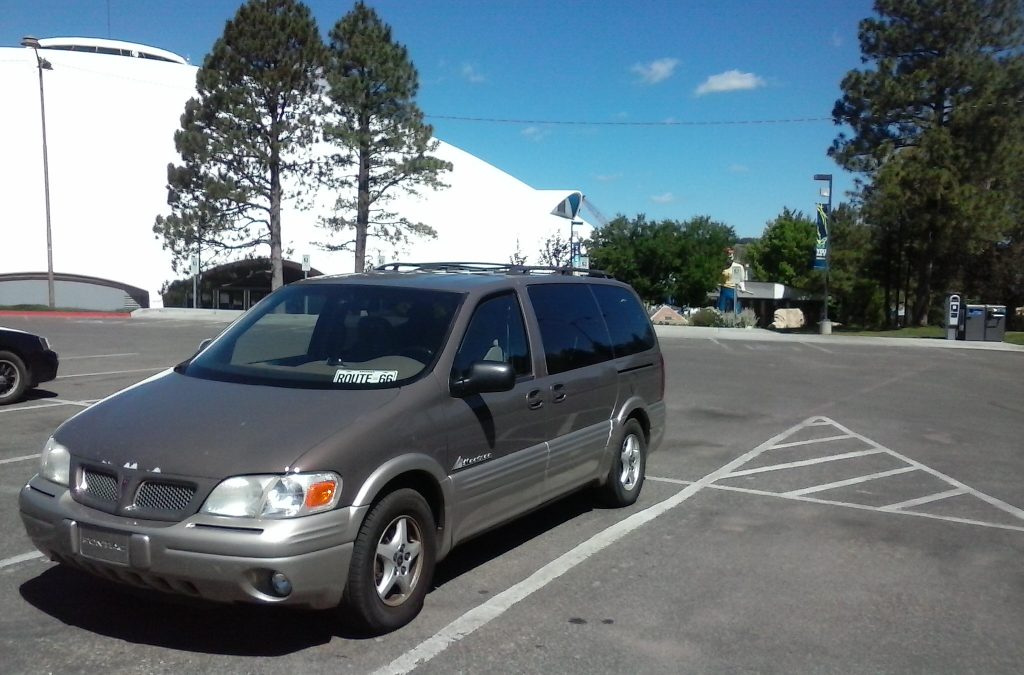 Who’s That Bashful Guy Hiding In The Tree Behind The Pontiac Palace? Could It Be A …?

Could it really be, hiding out in that tree behind the Mystery Montana … ? 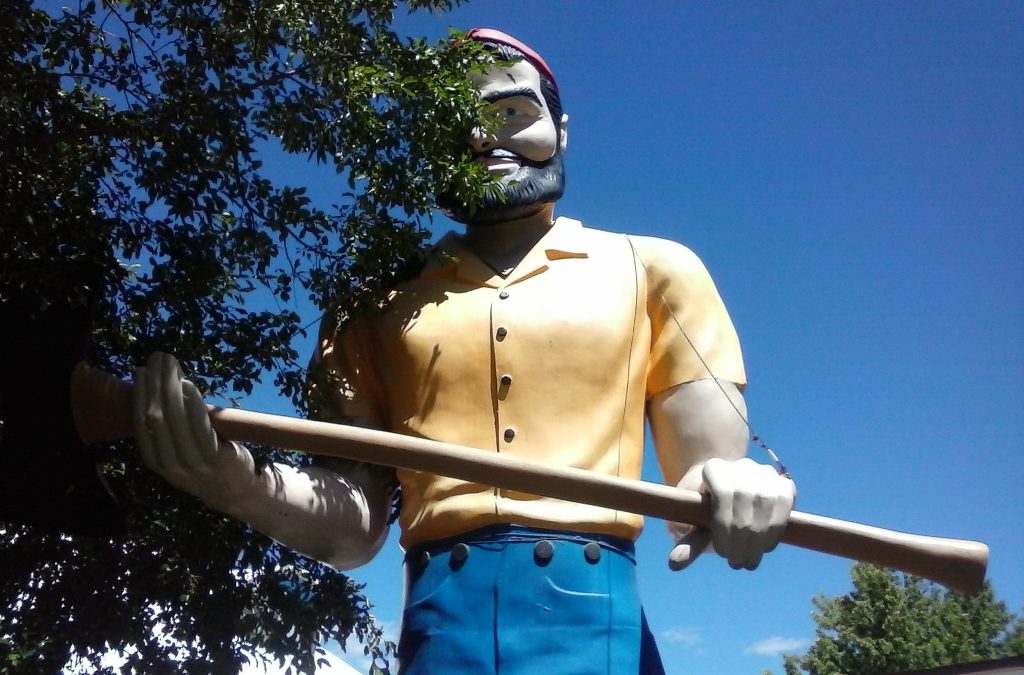 Eye Wish I Could See Out Of My Right Eye, So Eye Do! 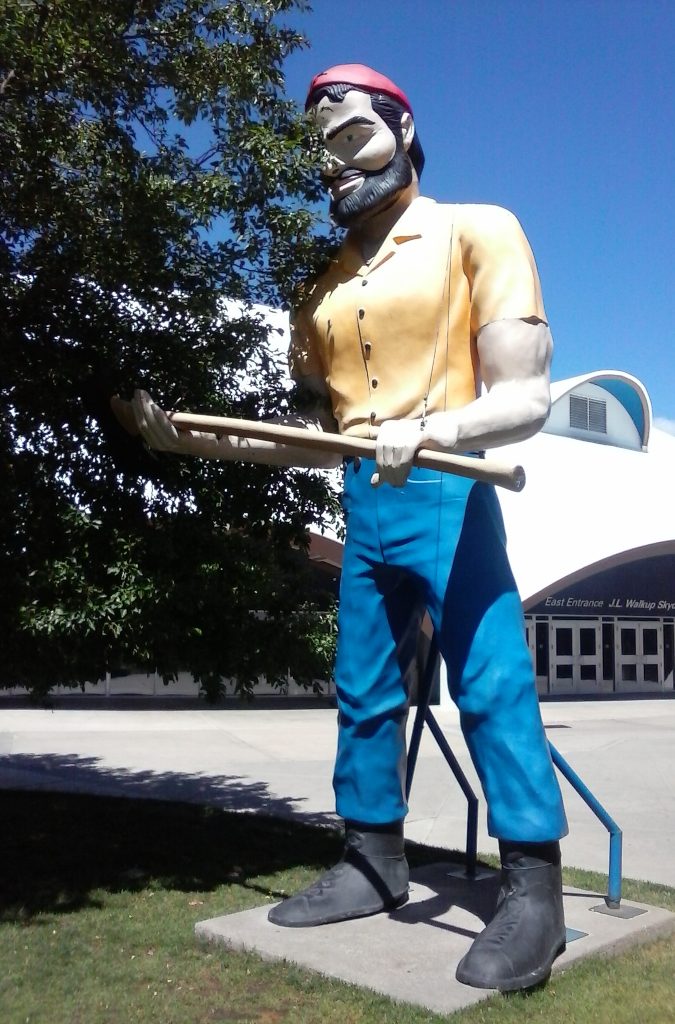 Route 66 Muffler Man Ready For Some Axe-shun at NAU!

….   and as we all know, behind every successful man, stands a … 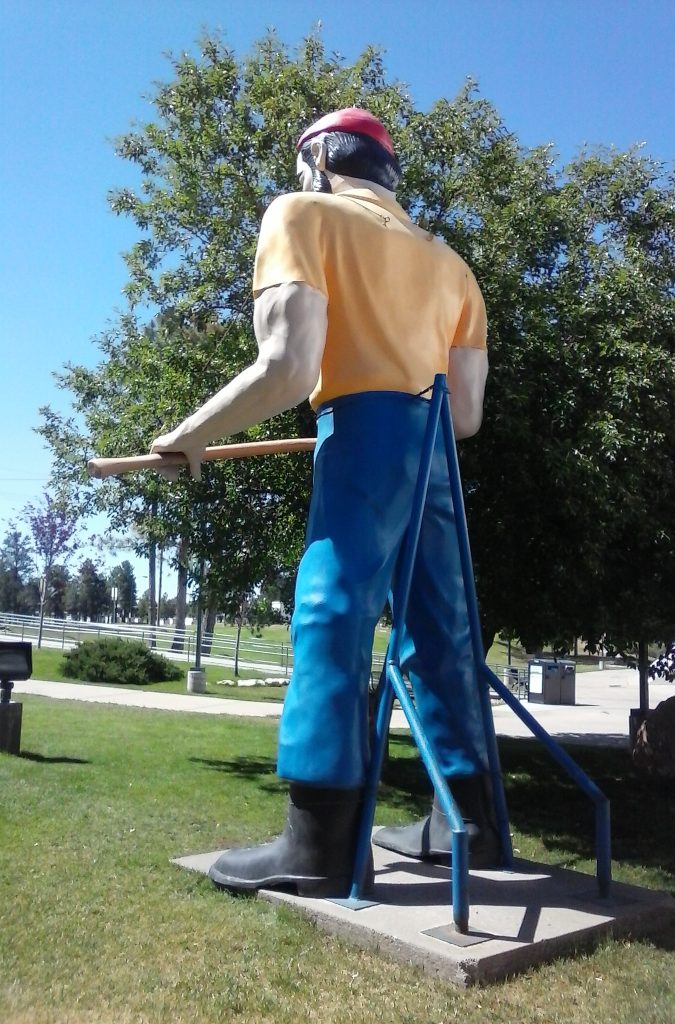 This NAU Muffler Man Gets Plenty of Support!

This is “Standin’ On The Corner In Flagstaff, Arizona”. Just doesn’t have the same ring to it, does it?

What good fortune! I was able to see the world-renowned Flagstaff Symphony Orchestra give their annual free 4th of July Concert at the Amphitheater. Thanks PT!

The FSO put on a great show as always. This year’s program included a whimsical selection from the “Grand Canyon Suite”. 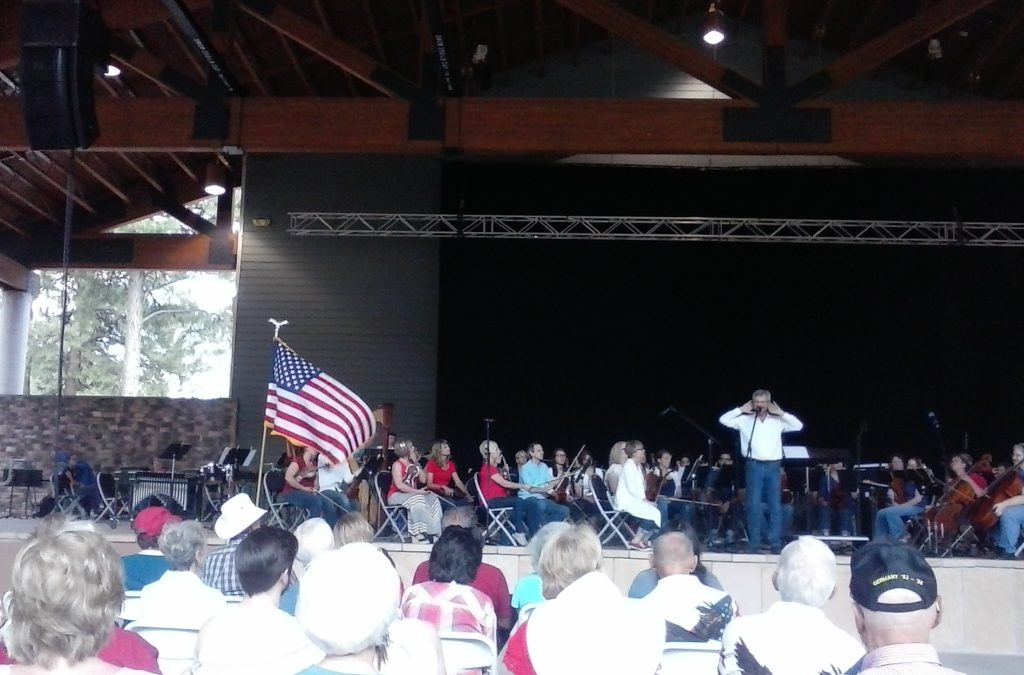 Extra points if you KNOW the selection being played by the FSO as the picture below was taken: 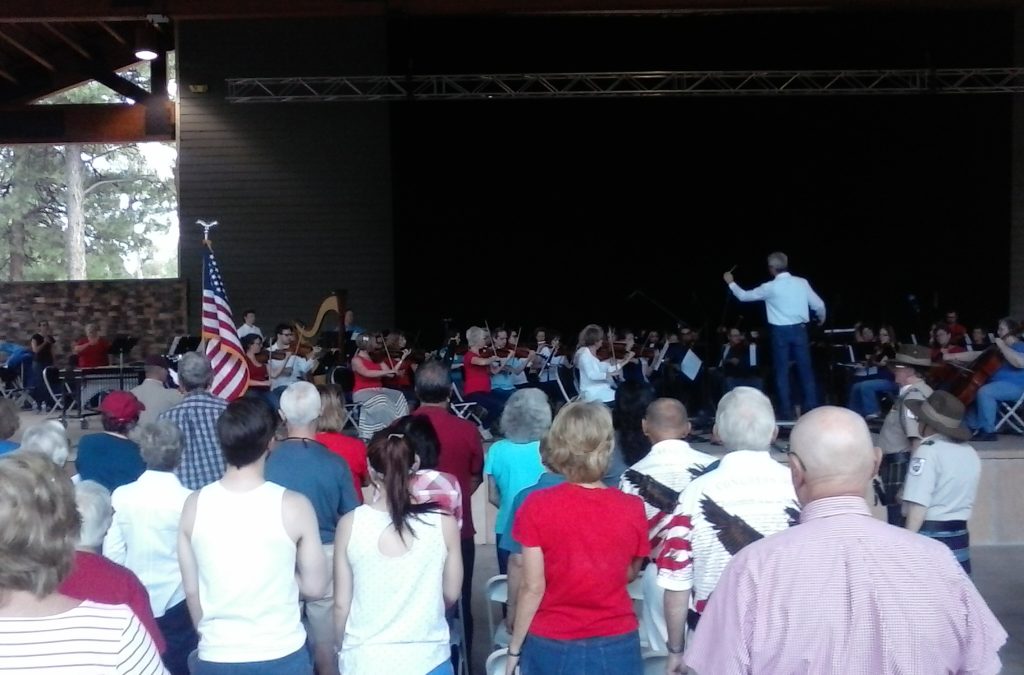 Meanwhile, I’m fleshing out the posts from the previous days and adding some pages. Continue to peruse the site as it grows while I am off America’s Main Street. 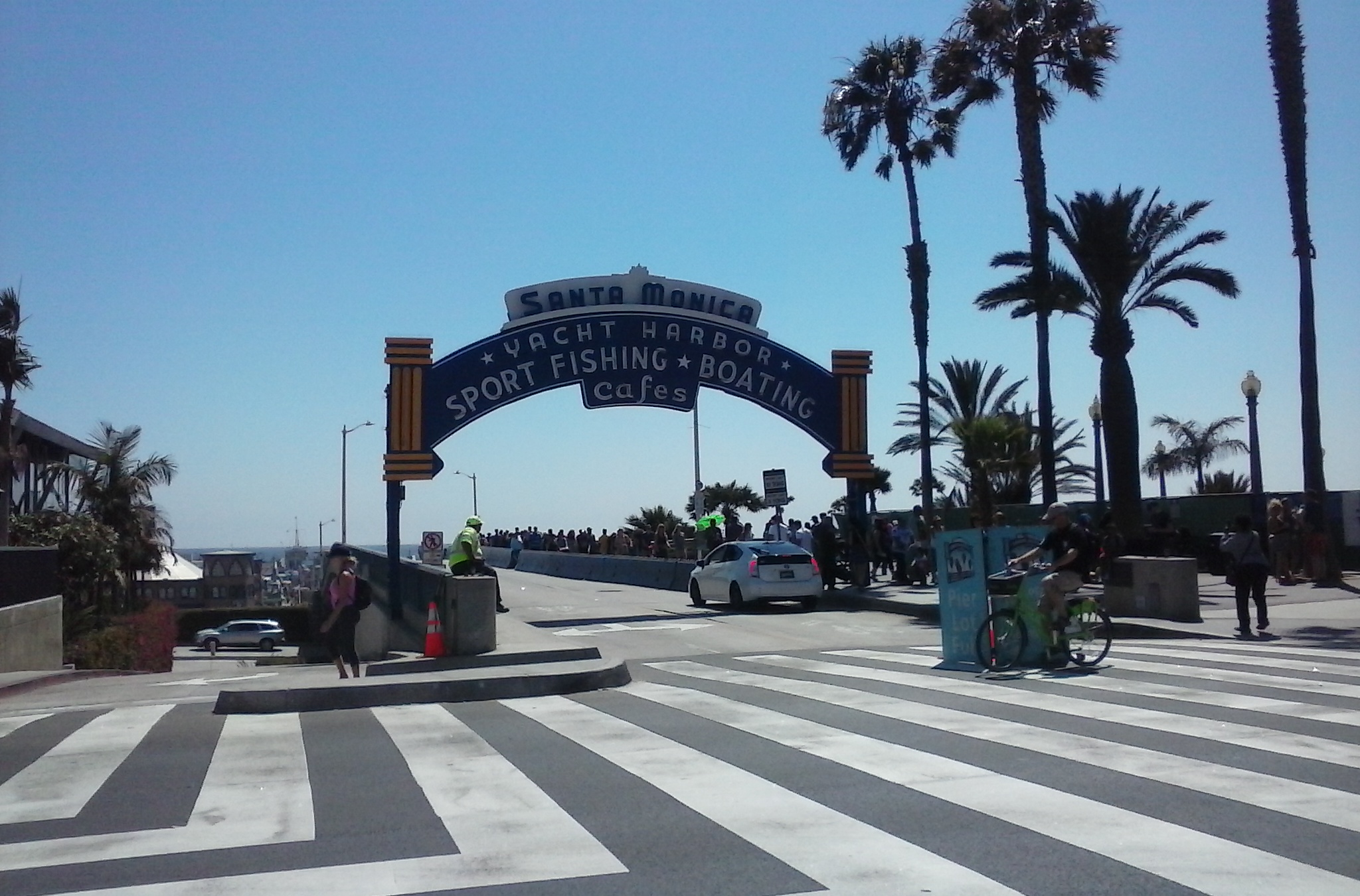 Day Seven on Route 66: Last Updated December 02, 2021. Your travel reporter Buzze A. Long was up before the sun and drive across #Route66 to America’s Most Advertised Fast Food Joint ™ in Barstow, California. In Read more… 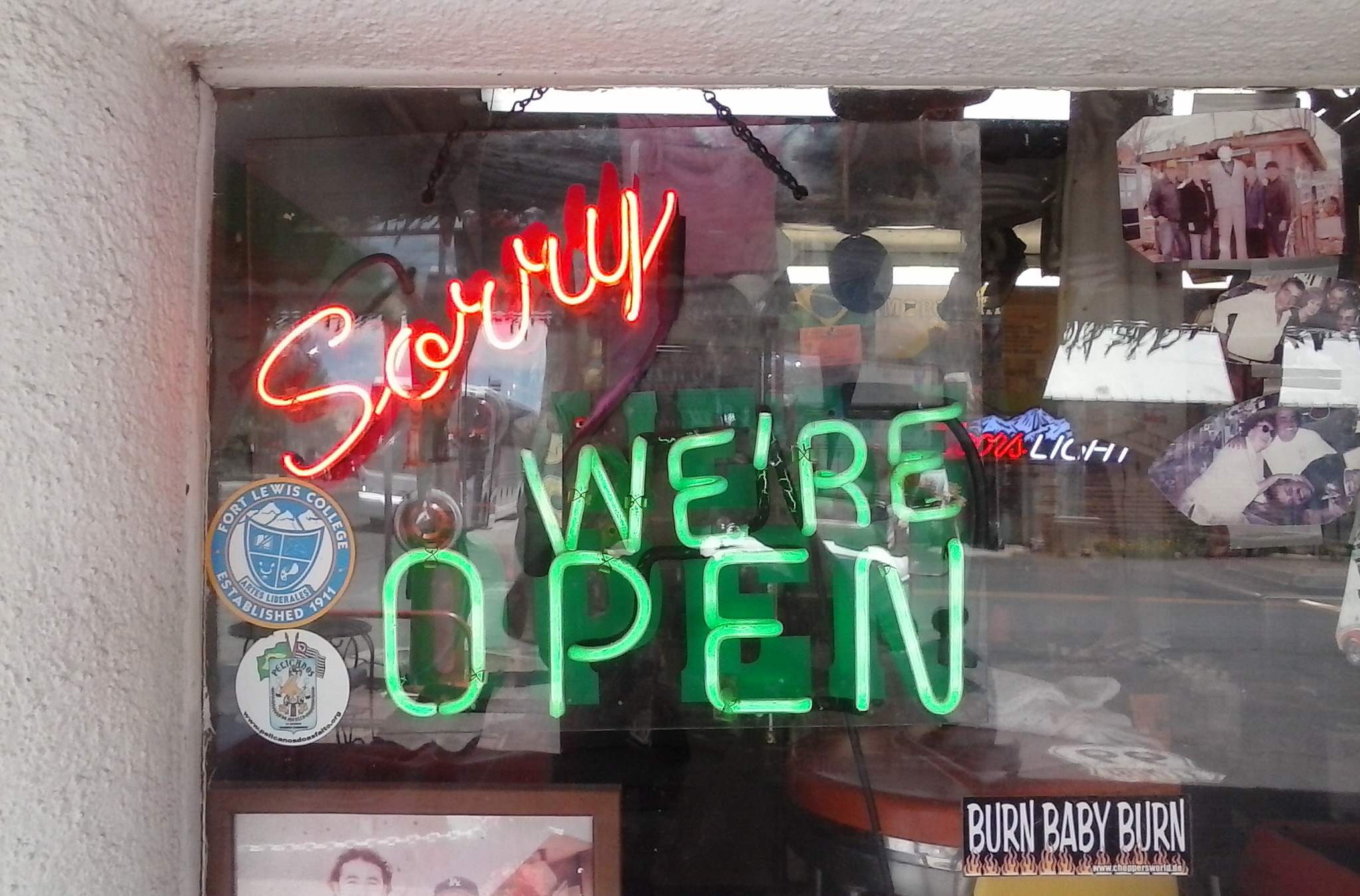 Day Six on The Mother Road US Route 66 Last Updated:  December 01, 2021.  #IDroveTheMotherRoadRoute66 #Route66 is waiting. Your U.S. Route 66 correspondent Buzze A. Long was up early, the laundry is spinning and the Read more… 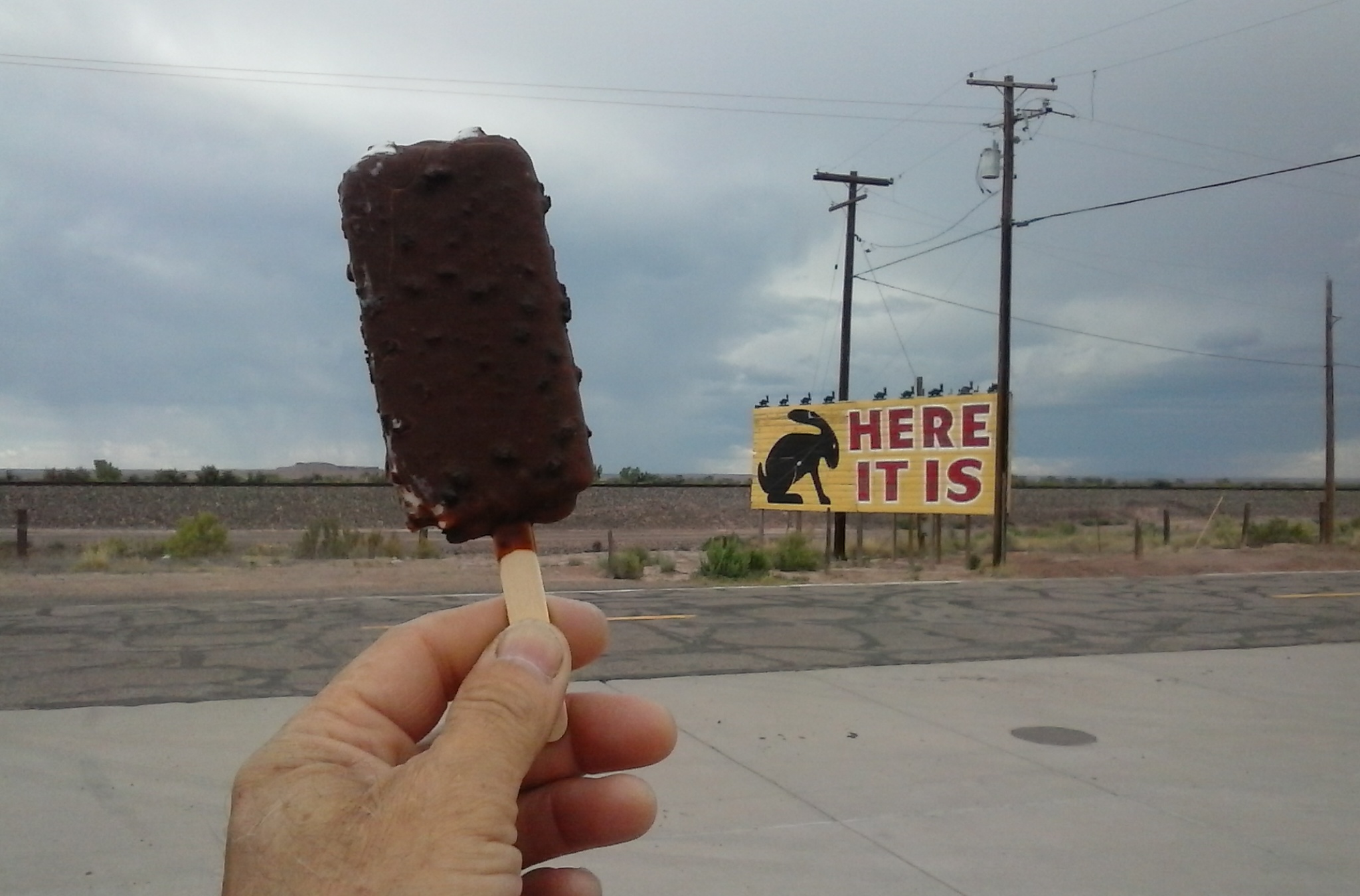 Day Five on IDroveTheMotherRoadRoute66 Last Updated: November 29, 2021. Yesterday was a long day on The Mother Road. Your peripatetic host Buzze A. Long was up early and pushed West on I-40 toward #Route66 in Read more…