Your travel reporter Buzze A. Long left Route 66 in Elk City, OK about 7:10 AM, then onto the SuperSlab I-40 toward the Lone Star State – which put in its appearance quickly.

Luckily, I stopped in Shamrock, TX

because I got to visit the Conoco Tower

The Conoco Tower is Art Deco

In fact, I got really pumped up about Shamrock, TX.

I Got Really Pumped Up at Shamrock

Stopped at McLean to see Phillips and the Rattlesnake Sign:

Alanreed, TX – I wonder whom it’s named after?

Further along I-40, the Leaning Tower of Britten came into view:

Look, those 2 back feet ARE really off the ground –

Feet Off the Ground in Britten

THE WORD from our Sponsor, A REAL Rock!

Rock of Ages in Groom, TX

As I entered Conway, I looked at the map and realized Conway & Twitty are both located in the Texas Panhandle!!

Panhandle, Texas is located on US60 just north of America’s Main Street.

Will work for food – Buzze doin’ The Texas Panhandle:

Take This Exit for The Mother Road

This routing of #Route66 goes past the Cattleman’s Club

Cattlemen’s Club in Amarillo on Route 66 by Buzze A. Long

I Drove The Mother Road Route 66

is an easy drive. The streets are good. I’ve driven I-40 through Amarillo and find The Mother Road to be smoother and more scenic.

As I drive out the western limits of Amarillo, the Boulevard crosses I-40. Make a right to remain on America’s Main Street. Hang on to your Cowboy Hat, The Cadillac Ranch will be an apparition appearin’ on your left. 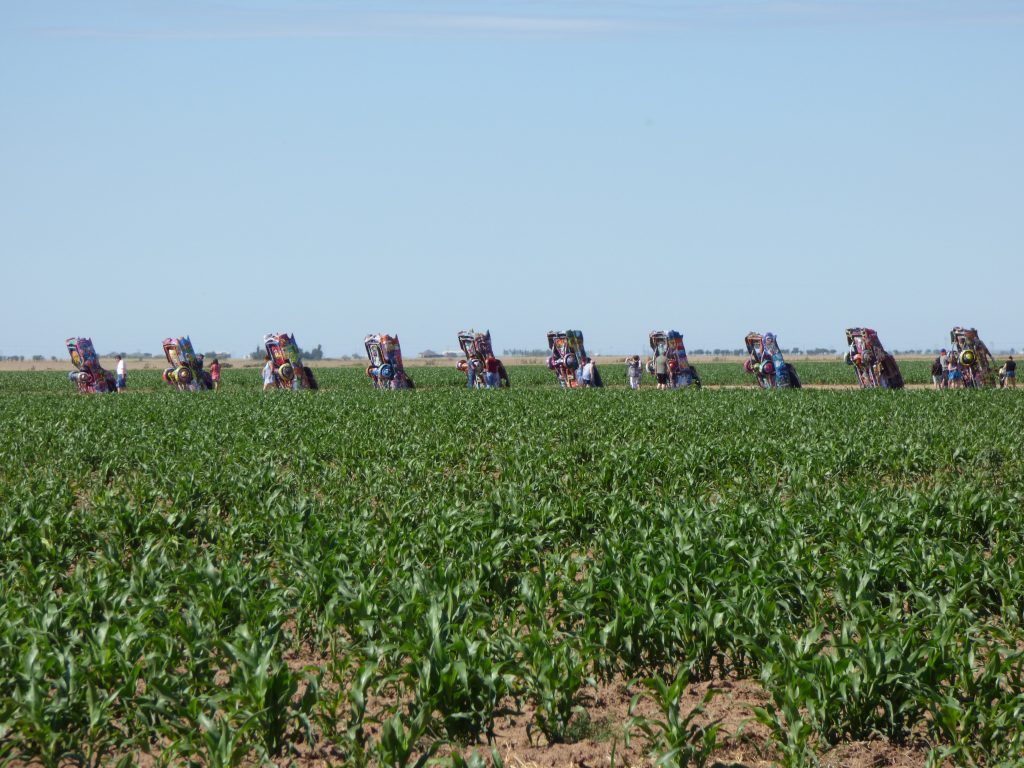 Retire at The Cadillac Ranch on The Mother Road 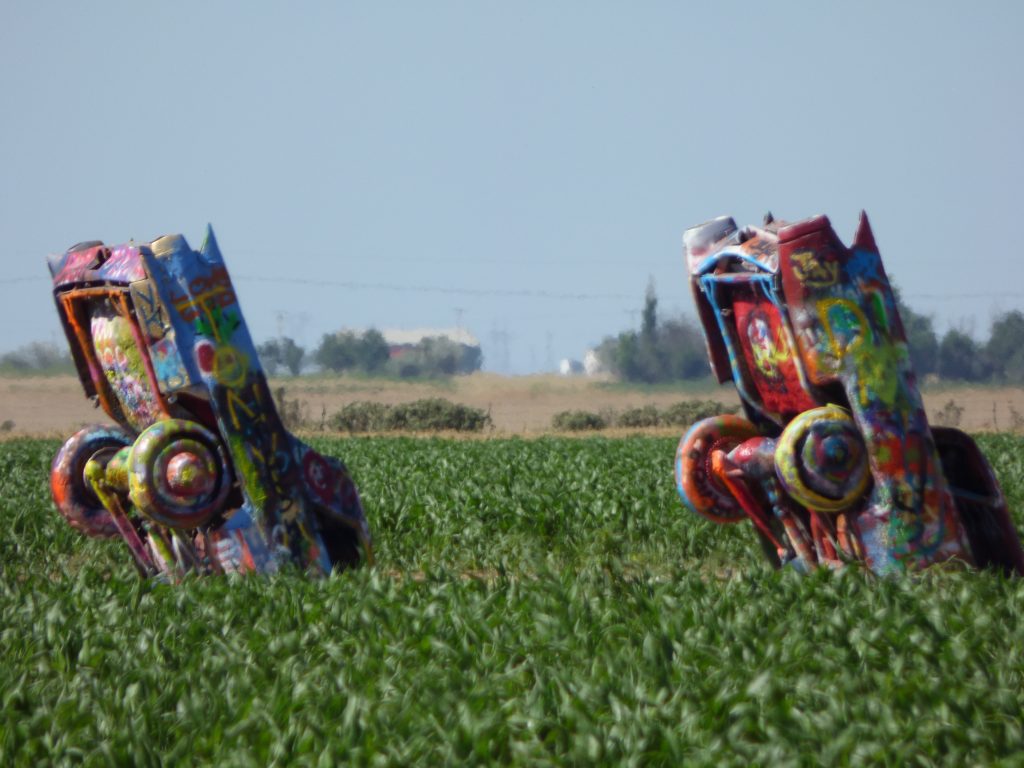 Fins Are Fine at the Cadillac Ranch on Route 66

I-40 makes a loop around Vega, TX. I slip on into town to see what is going on. There is some neat stuff in Vega, TX. I spent nearly an hour there.

All Eyes Are On Vega, TX

Texas Route 66 In Vega by Buzze A. Long

Route 66 Ends On The West Side Of Vega

We Fix Flats And Get Pumped In Vega, TX

The Journey is Half Over

A stop in Adrian Texas confirmed this fact, with a rare sighting of your Peripatetic Publisher Buzze A. Long:

#IDroveTheMotherRoadRoute66 is halfway to Santa Monica!! – picture courtesy of a gal from London.

The Halfway Point was crossed at just under three and a half days into the trip. Notice the sign – I’ll be following the National Old Trails Road most of the way to Santa Monica Pier.

You Meet The Nicest People On   Route 66 The Mother Road

Y’know, one thing I like about traveling is the people you meet. As I was wandering around out front of the MidPointCafe ( I wonder why they didn’t call it the HalfwayCafe ) , I noticed a couple. Actually, they had been taking pictures on the south side of The Mother Road as I drove up. Crossing to the north side of the road, the one with the Official Sign, I heard myself being addressed in a funny accent. As they used to say on KDKA Radio, “funny haw-haw” OR “funny peculiar”? This was of the “funny-peculiar” type. English with a different twang to it – THE KING’S ENGLISH!. The lady was asking me if I would like my picture taken with the sign. “Where are you folks from?”  “England” “Whereabouts” “London”.  It turns out that their trip, as with mine, had originated at the “Route 66” sign on Adams Street in Chicago. They had been traveling for 8 days already and have set aside 3 weeks for the trip.  Safe travels, guys, and I hope to see you further along America’s Main Street. You are taking some great memories back to London & thanks for taking ol’ Buzze’s tintype.

I begin to feel it or smell it, just a certain feeling in the air. Just west of Adrian, TX, the Real West – dry, mesa country, the Southwest – begins. I feel like I am home again. Feels great to be back.

Glenrio, Texas is a special kind of town – the type of town I travel The Mother Road Route 66 in search of. As I pull into the outskirts of town, a herd of bikers accompanied by some support cars, is exiting Glenrio.

Glenrio is unique – I gave it its own page here on IDroveTheMotherRoadRoute66.com.

Lone Star In The Rearview, New Mexico Coming Up

Entering The Land of Enchantment on I-40

My first stop in New Mexico was San Jon. Route 66 is a 4-laner there, just as in Glenrio. San Jon is more prosperous – Post office, gas stations etc.

San Jon has its own version of

You Can Check Out But You Can Never Leave …

Eat Up in San Jon, NM

After San Jon, I stopped in

for ice cream and to update the blog – Tucumcari had so many photo opportunities that it now has its own page.

Next exit was at Santa Rosa:

Then on to Moriarty:

Here I exited for Moriarty on the east end of town & followed Old Route 66 to the west, up over the hill and down into Tijeras.

As you travel west from Tijeras,

follows NM333. West of Tijeras, the road splits, the right fork leads to I-40 West and Albuquerque, the left fork is marked NM333 / I-40 East. I take the right fork but realize my mistake early enough to utilize the wide turnaround here. I’m able to get back on NM333 and continue Old Route 66 into the city of Albuquerque.

This is a good route, it brings you into Albuquerque on Central Ave., over Nob Hill and into UNM. The lights are timed pretty well so you can make good time going west on Central toward Old Town.

Albuquerque is named for the Duke of AlbuRquerque ( note the extra R ) and so one of its nicknames is Duke City. There is even a local convenience store chain which uses the name Duke City.

Albuquerque is another old home town of mine. I lived here for a couple of years and ate in the Nob Hill area occasionally.

New Mexico is the only state in the U.S. to have a State Question: Red or Green? Chilis, of course. If you would like some of each, the answer is “Christmas”. All the fast food chains have adapted. Green chilis on your burger? You got it!

Smart travelers will make a right just to the west of Angel View and get back on I-40 westbound. I didn’t. Old Route 66 didn’t LOOK too bad as traveled west on it from Angel View. Four lanes turned to two, then dirt. It’s Open Range here. Open Range is just another way of saying, “Look out for cows and varmints running loose”.

I knew there was a casino at Rio Puerco so I wasn’t too concerned, figuring the dirt road would lead to the casino.

I figured wrong. About a half mile east of the casino, the dirt road forward is blocked & posted. But what is this off to the right? A tunnel! With a light at the end, the OTHER end!

It leads under I-40 and to a 2-lane hardtop service road which leads west to the old Rio Puerco Bridge and freedom! Back on I-40 West!

Traveling west of ABQ on I-40, look for the moccasin on the north side: 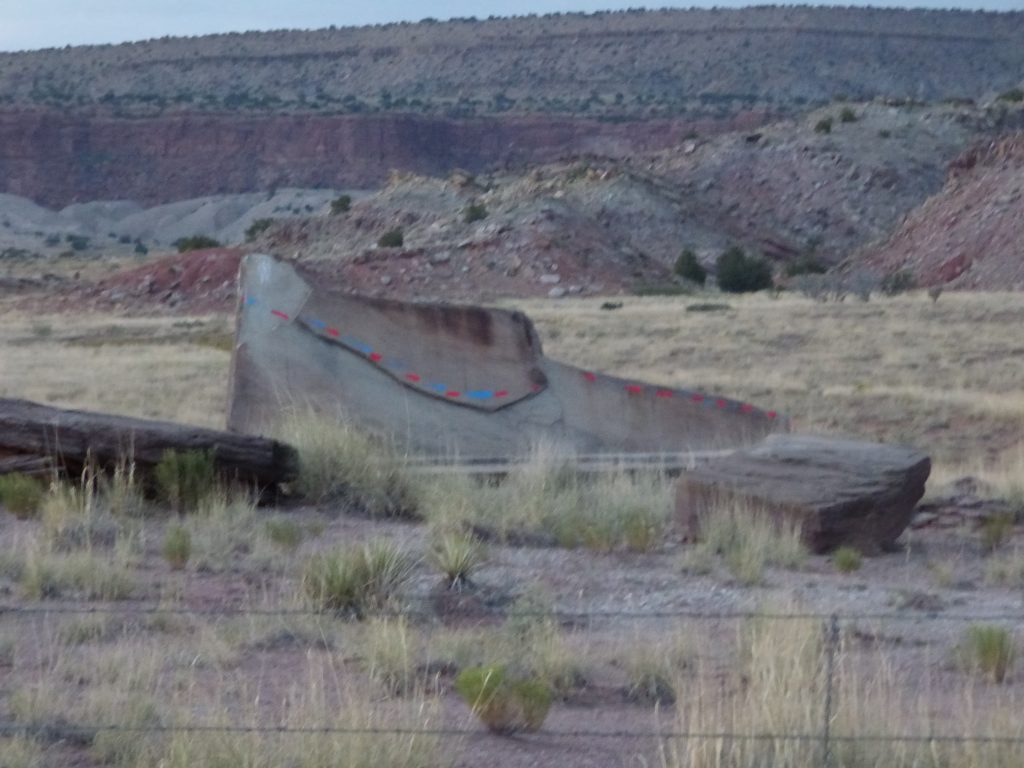 The Moccasin West of ABQ on #IDroveTheMotherRoadRoute66

Don’t blink or you’ll miss it!

It is getting dark, too dark for good pictures. With that, I continue West on I-40 to Sky City Casino, pull off and call it a night.

The day ended at Sky City, NM. Three states and about 400 miles today.

Thanks for coming along on Day Four!

Day 5 on The Mother Road coming up!

Looks like you are having a blast there at the halfway point! Enjoyed the posts.
A++ for creativity on the name. Safe travel. Keep us posted.

Day Seven on Route 66: Last Updated June 23, 2020. Your travel reporter Buzze A. Long was up before the sun and drive across #Route66 to America’s Most Advertised Fast Food Joint ™ in Barstow, California. In Read more…

Day Six on The Mother Road US Route 66 Last Updated: April 31, 2020.  #IDroveTheMotherRoadRoute66 #Route66 is waiting. Your U.S. Route 66 correspondent Buzze A. Long was up early, the laundry is spinning and the Read more…

← Day Three Page Two On The Mother Road – Quapaw, Afton and More in Indian Territory ← Day Five on America’s Main Street – Leaving New Mexico for Flagstaff, AZ
IDroveTheMotherRoadRoute66 uses cookies to ensure that we give you the best experience on our website. If you continue to use this site we will assume that you are happy with it.OK