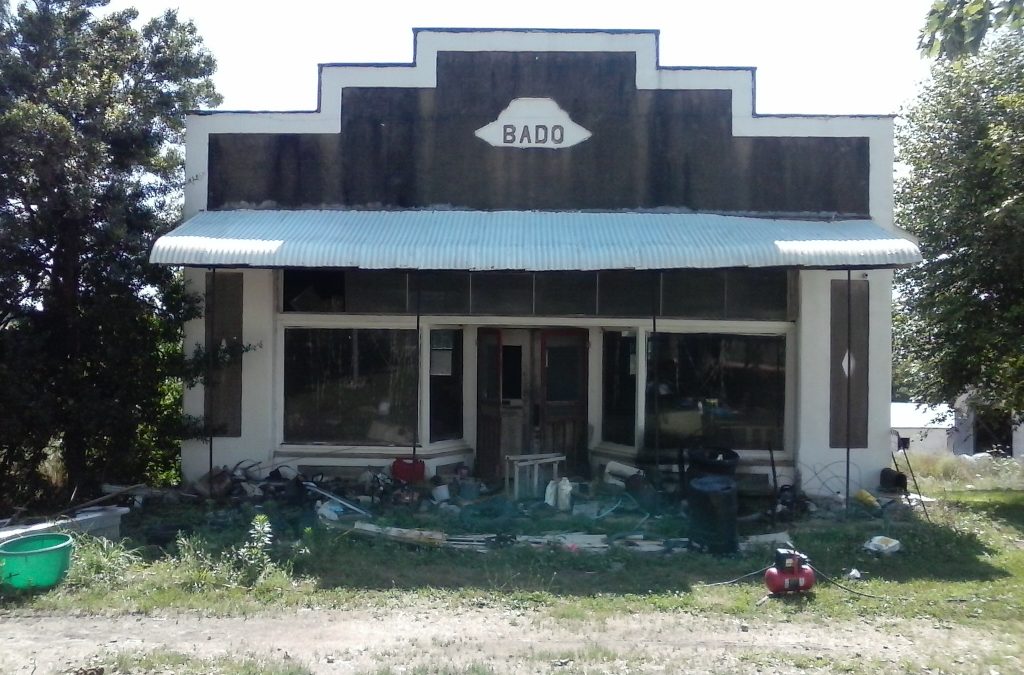 My grandparents left home when I was 19. They were ‘of age’, I couldn’t stop them. They sold their farm and moved to Cabool, Mizzurah.

I never saw them again. Unfortunately, they died shortly after moving there. I always thought they were buried in Cabool until I did some research on the web and talked to my cousin while visiting Back East recently.

It appeared that the graves were actually in Bado, Missouri. Since my trip on The Mother Road would be taking me through Rolla, Mizzurah, I decided to see if I could find the cemetery. Bado, while practically a ghost town, is actually on the map issued by MoDOT. My GPS did not have a listing for Bado so I punched in Houston, MO and rolled out of Rolla on down US63.

US63 is a pretty good road. Most of it is posted at 65 mph and the surface is smooth. There are passing lanes and not too many towns. My plan was to go through Houston, hit MO Z and head west to Bado. Z, YY to M and there is Bado. At least, that was the plan. I blew through Bado without so much as a by-your-leave, then came up like a beached whale at Fairview.

Where’s Bado? Like ‘Where’s Waldo’, they musta moved it when I wuzn’t lookin’.

A quick u-ey, a roar of the powerful 3.4 and I’m headed back toward where Bado should be but wasn’t.

Back in ’65, when we were on Our Own Grapes of Wrath Tour (c), we all came through here in our ’52 Chevy DeLuxe. Five people living in a 2-door car. We were looking for my uncle’s place. He had just recently left the environs of OK City for Mizzurah. Dad stopped at the Post Office ( now the USPS, We Deliver For YOU! ) and got directions to my uncle’s place. Of course, my aunt & uncle had no idea we were just going to crash at their place, no idea we were coming, so we had no real directions. They didn’t have a phone. Come to think of it, it seems like they didn’t have electricity either. This was long before the ‘web, Sonny Boy.

Anyway, this was back in the era when the gas stations gave out road maps. First, though, before they would give you a road map, you had to pass the test by demonstrating that you could fold it back up. You think that’s easy, try doing that with your new-fangled GPS.

Mizzurah completely flummoxed my Dad. Why? State routes in MO do not have a number. The MO state routes are lettered, not numbered. This really threw my Dad. I think he was ready to straighten Missouri out by getting a can of black paint and traveling the entire state, replacing the letters with numbers. Repaint every sign with road NUMBERS, just like every other state used.

Here’s another Buzze Tip – Missouri led the vanguard, even back in ’65 they were into recycling. What did they recycle? The letters that roads were known by! They still do it today!

So you may have a couple of miles of a MO Road known as “H” in the southeast part of the state. A few miles, or 200 miles away, is another MO Road “H” but they have absolutely nothing to do with each other. This really threw Dad. We knew my uncle’s place was off, or should I say on, MO YY. Dad, of course, couldn’t find it. I can see him yet, stopping at every farmhouse in the “Show Me State”, unfurling that MO map and arguing with anyone who would listen. He just wanted to know how “YY” was here, now “YY” appears over there and demanding to know why “YY” wasn’t where. ( That was alliteration, for those of you who are not reading this out loud). After that map was in tatters, our bellies were growling and nightfall had fallen, we finally drove up the washed-out driveway to my uncle’s place.

When he came out and shined a flashlight in the car at us five disheveled, unemployed, hungry Grape-o-Wrath’ers – all my uncle could say was “Dad Gum”.

… Sorry about that, I just got to writing and couldn’t stop. Where was I?

Oh yeah, I had turned the Mystery Montana back toward where Bado was supposed to be.

Unlike Dad, I plan to be out of Mizzurah before nightfall. Learning from Dad’s travels back in ’65, I stopped at a prosperous-looking brick home. Knocked on the door which set the dogs off. It’s Sunday afternoon, they were probably having a nap. The people in the house, I mean, not the dogs. Well, probably everyone, dogs included, was having a nap and I set them ALL off.

“I’m from out-of-state and looking for Bado Cemetery. Hoping you know where it is”.

“Thanks! Sorry I woke you”.

Well, I meant to add “Sorry I woke you”, but it’s too late to go back & wake him up again.

Then, there it was, just like he said. Left on a dirt road. But now what? I’m in the middle of a barnyard and the road forks. I don’t know which fork to take, or if there will be a shotgun poking out of a winder soon.

Then there he is. The Old Guy Working On A Tractor. Every farm has at least one. This one did NOT have a shotgun. Heart drops out of throat, back to more or less where it belongs…

I roll down the passenger winder.

Me: “I’m looking for the cemetery”.

Old Guy: “It’s right up there to the right. Whooya lookin’ fer?”

OG: “I noo’em. Helped dig the graves fer ’em too. That was back before they had the machine ferrit”.

Me: “What about Uncle? Is he buried here too?”

OG: “I noo’im, too. Helped dig the grave fer ‘im too. That was back before they had the machine ferrit”.

“G’won up there to the right. I’m airin’ up this tire, then I’ll come up and make sure yuh found it”.

I go up to the right, open the gate and find the graves I’m after; Grandma, Grandpap; an Uncle, Aunt and Cousin.

Just standing there looking down at them. Getting some pictures.

I usually talk to the people I go to see in cemeteries. The words haven’t come yet. Putt putt putt. It’s TOGWOAT coming up on his four-wheeler.

“I see you found ’em. You can drive right in here if you want. Gotta get back to airin’ up that tire”. He putt-putts away, leaving me alone with my family. The words are coming now. “Grandma, Grandpap, sorry it took so long to get here”.

A couple more shots of the graves for location, store the lat/long in the GPS and get a few shots of the church. 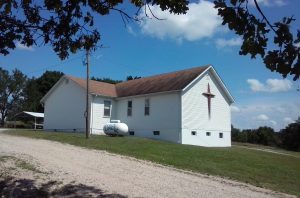 Bado, MO was a stop in the life of #IDroveTheMotherRoadRoute66.com 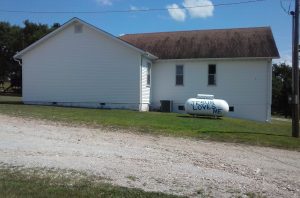 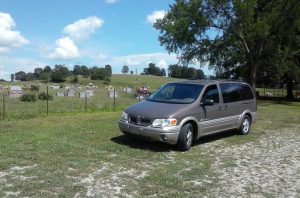 Mystery Montana at the Bado Cemetery 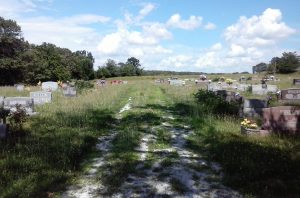 Bado, MO Cemetery – “You Can Drive Right In”. But Can You Ever Leave? I Take No Chances 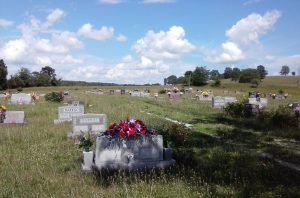 Me: “I’ll show you what’s wrong with it. We can fix it. It’s the o-ring. Got a Phillips screwdriver?”

Me: “Got one right in the back of my car. Gotta crescent wrench?”

Me: “Nevermind – I’ve got a crescent wrench too”.

I’m pulling the head off the air compressor.

I move. Outta the sun.

Me: “This might be guaranteed for life. If this don’t fix it, try taking it back to Harbor Freight”.

He probably paid more at the sale than a new one would cost.

The o-ring is OK. The reed valve on top of the piston is OK. I’m hoping that it’s just the fact that all the screws were loose on the head. I want to be a hero to TOGWOAT this Sunday afternoon.

The compressor goes back together. I carry it back out into the sun and turn it on.

“I didn’t know he was in the Blue Lodge”.

I give TOGWOAT a twenty to help with the cemetery upkeep.

“Is it OK to take some pictures of the old general store and the gas station?”

“Ever’body who comes back in here asks to do that”. 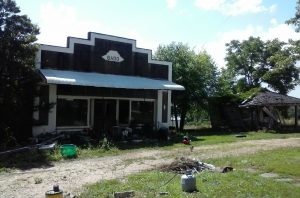 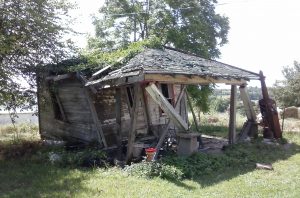 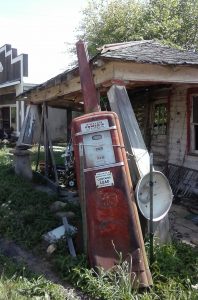 Getting Pumped in Bado, MO

Bado survived a flood and a tornado, but not modern times…

Thanks for ridin’ along with ol’ Buzze

Saw your story and pics when looking up Bado, MO. My Mom had family there and she told me her aunt and uncle owned the little store you posted in your photo. She said they sold dry goods in the front and there was a post office in the back. I think their last name was Coats. I also see that name on one of the headstones in another of the pictures you posted. Another family name to which we are related in the area, is Clark. There is one other relative there whose last name she cannot recall at the moment but it will come to her eventually. My Mom used to spend at least a week or two there every summer visiting her aunts and uncles. She lived there for a bit as well when her own single Mom fell on hard financial times in the late 40’s early 50’s. She told me one of her dear aunts was a missionary to the needy throughout the Ozark region. She visited the homesite several years ago and found the caves in remains of the little stone house in which she lived. She said she had one remaining cousin in the area who just passed shortly after her visit there. I’m thinking I may take a road trip to see the area sometime

Beautiful part of the country. Historic Bado is unique.

Hope you get to take your trip, it’s a time capsule!

What Do Buzze’s Readers Think?

How To Survive Route 66